My son's seizures come in clusters and eventually peter out. The spasms, like cudgels, are battering to his mind and body. Recovery takes days before again ramping up. Their arrival is manifest. The attacks are unforgiving. Angst and dread take up residence. I feel the same about our Nation.

I'm awake at night still reeling from the January 6th attack on our Capitol. At least five people are dead. From coast to coast, bad actors are planning more attempts. Antisemitic, homophobic and racist images at the uprising shocked and upset. T-shirts with "Camp Auschwitz" and "Six Million Wasn't Enough" were worn by neo-Nazis known for chanting, "Jews will not replace us." Rioters called Capitol Police officers the worst racial slur. The Confederate flag, which has a habit of being brandished by White supremacist racists and traitors, was marched through the halls of Congress. A Christian cross was erected. Jesus was hailed and beseeched. American flags were used as cudgels to beat police. The betrayals were brazen. It seems "Blue Lives" don't matter when you have an agenda.

The lie of a rigged election was one that the President and his enablers hammered home for years and provoked the riotous insurrection. Like other despots—Hitler for instance—the President laid the dangerous and deceitful groundwork by fearmongering and stoking his base's White resentments and fears of being eclipsed. He knew what he was doing. His words are careful, cunning and deliberate. Efforts to overturn the election outcome in Democratic strongholds—Milwaukee, Philadelphia, Atlanta, Detroit—were failed attempts to disenfranchise a mostly-Black electorate.

The president's supporters have since resorted to deflection—to racist tropes, whataboutisms and scapegoating—by shifting the conversation from the violent siege of our Nation's Capitol to the Black Lives Matter protests of last summer. The contrast is sickening.

To be precise, the Black Lives Matter protests are about the generations-long scourge of lethal police violence against Black Americans—George Floyd, Breonna Taylor, Daniel Prude, Philando Castille, twelve-year-old Tamir Rice, plus countless and mounting others. Its mission is righteous: to peacefully protest the unjust murders committed by the very public servants who vow to protect all of us. The protests are vastly peaceful, unarmed, diverse, grassroots demonstrations attempting to secure the yet elusive constitutionally-protected civil rights of Black Americans.

On the other hand, the riotous insurrection at the Capitol was a well-organized, armed and violent siege by far-right militias, neo-Nazis and gangs of White supremacists—by far the most dangerous terrorist threats to our Nation since 9/11. Weapons were wielded. Hangman's nooses and makeshift gallows were hung and erected. The lives of legislators were threatened with execution. It was a flagrant attempt to overthrow a free and fair, certified, democratic election. And again, it was based on a lie—the lie of White entitlement—that any election the President and his mostly-White base didn't win was somehow stolen from them by people they deem as dishonest and/or less deserving, that is Democrats, namely American Democrats of color. The conceit is egregious.

A White friend asserted that the riots at the Capitol were not race-based, but rather a response to greed and power. I objected by saying:

Unlike the President's pandering to White supremacists and neo-Nazis, he did not tell BLM protesters that he loved them, nor did he tell them that they were "very fine" and "very special" people. He did not embrace or endorse the peaceful protests of Colin Kaepernick and other Black athletes; he condemned them. His administration squashed the protests of indigenous Americans trying to protect their sacred land and water. He cruelly separated brown immigrant children from their mothers and fathers. He reserves his coddling for White supremacists because he is one of them. He and his henchmen in congress employed their far-right base as cudgels to do their dirty work, to thuggishly overthrow an election after all legal avenues had been rejected. Pay close attention. Just like their bigoted and sinister imagery, toxic and threatening rhetoric, and violent, seditious siege of the Capitol, the smug, straight-Christian-male-White supremacist entitlement is blatant and dangerous, a malignant cancer in this Nation.

Today, I heard a piece written by James Baldwin, A Letter to my Nephew, which sums up the state of things in America nearly sixty years later. I encourage you to have a listen or to read it. It's all there—the ugly truths we must face before we can change them. Here is an excerpt:

In this case the danger in the minds and hearts of most white Americans is the loss of their identity. Try to imagine how you would feel if you woke up one morning to find the sun shivering and all the stars aflame. You would be frightened because it is out of the order of nature. Any upheaval in the universe is terrifying because it so profoundly attacks one's sense of one's own reality. Well, the black man has functioned in the white man's world as a fixed star, as an immovable pillar, and as he moves out of his place, heaven and earth are shaken to their foundations.

Like all seizures, these attacks on our democracy are unforgiving. Angst and dread take up residence. Their arrival is manifest. All we can do right now is to try and arrest them. 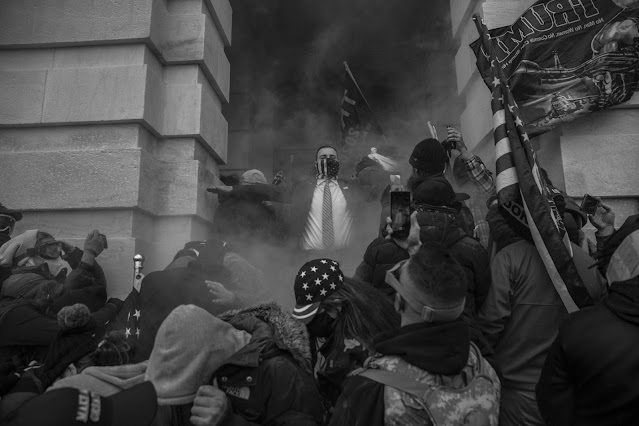