my kid falls and breaks his hip. he undergoes surgery to fix it. a four-inch incision and three steel screws jammed through his femur. some days later, he gets feverish and sick. he has three grand mals in two days. the same number in the entire month of april.

everyone is under the weather. snotty, runny, stuffy noses, though testing negative for covid. even the dog snores. unruly, drunken students traipse by on their way to and from parties between eleven p.m. and two-thirty in the morning. it's hard to get a decent night's sleep. i lie awake worrying about the serious and mundane. i think of my huggy child and how i should farm him out to nursing homes as a therapy kid. if only he didn't have innocent fingers good for poking out eyes and scratching necks.
luckily, an afternoon nap (a rarity) is like a pat of butter smeared on a hunk of freshly baked bread. it's a cloud. it's sugar dissolving into warm liquid. a salve and a salvation. the sounds of daytime waft through an open window: a young man shoveling gravel; songbirds; light traffic; lawn mowers. i deliciously drift in and out of the dream world, my husband and child saming me in the room next door.
i carry my ninety-two-pound child down the steep flight of stairs from the second floor where we've been camped out for five weeks which feels like a chunk of forever. he walks a few yards on the grass holding my hands as i step backwards, guiding him. i lift him into his stroller. buckle him in. push him around the garden taking our millionth loop. he paws an alberta spruce. takes his glasses off and begins chewing them. i can see he's done. he goes back up the stairs with a lot of help from me pushing his bum. he's happy to get back into bed again where he's free to do practically nothing.
he's supposed to go back to school on wednesday with walker and wheelchair and some vigilant humans. still, i'm nervous. he's not walking that well. his gait is slanted. his change of direction and pivot is hitched. i don't want him to get hurt again. it's a natural concern. but i need a rest. i miss my pennellville vistas, walks and runs. i miss my garden. i miss time and space spent alone. miss doing things for myself. miss my friends.
while i'm changing a wet diaper, i hear a barking dog. i look outside the open window to see if i can spot the snarling pooch. i see my neighbor walking his achy, ancient beagle who, by the way, isn't the culprit. half chuckling, i bark at him (my neighbor, not his dog) as he looks around in puzzlement. i bark and laugh again, and can see from my perch as he beings to understand, though still can't tell where i'm coming from. i call, "never a dull moment when you live next door to christy shake." he laughs and says something about crazy neighbors. i'm amazed and delighted, despite this slice of hard life, i still have a knack for humor, and that some people get my jokes. 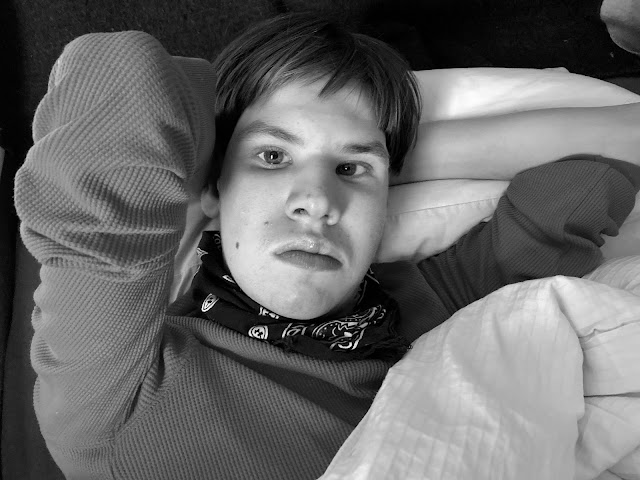 It has been four weeks since we took Calvin to the emergency room, and three weeks since he had surgery to install three stainless steel screws into his femur which had been broken during a fall at school. He has spent the better part of every day since in bed recovering. It's a good thing my husband is gainfully employed so I can stay home all day taking care of our son. A little over a week ago, with help from me to hold his hands on a walker, Calvin began taking a few baby steps each day from his bedroom to ours. It's a bit of a struggle; he can't go far—just partway across the carpeted room. Sometimes his little legs quiver. Is he in pain? Are his muscles fatigued? Both? Since he can't tell me, I can't be sure, and that just about kills me.

When I think about how long it took Calvin to get to the point where he could walk safely and somewhat independently (was it ten, twelve, fourteen years?) without a safety harness or a hand to hold, I could cry. He and I have worked so goddamn hard to get where he got before the fall, and it's painful to think it was lost—at least temporarily—in a matter of seconds.

Thankfully, it seems our boy is on the mend, though he is still walking very tentatively and not for any significant distance, and he can't do stairs for another two weeks, which means I have to scooch downstairs with him on our bums and carry his ninety-two pounds upstairs. What I worry about as much as anything is that Calvin will suffer the kind of hidden and chronic pain—like headaches or arthritis—that isn't bad enough to cause him to limp or bring him to tears, but exists nonetheless. We can never know, for instance, if those steel screws will at some point cause him bone pain or if they'll irritate the surrounding tissue. It's miserable knowing my baby can't tell us when he's hurting, can't get relief for what ails him. It's the trouble with mothering him, which—though I've struggled at times in my life—may be the hardest thing I've ever done.

This is what you shall do; Love the earth and sun and the animals, despise riches, give alms to every one that asks, stand up for the stupid and crazy, devote your income and labor to others, hate tyrants, argue not concerning God, have patience and indulgence toward the people, take off your hat to nothing known or unknown or to any man or number of men, go freely with powerful uneducated persons and with the young and with the mothers of families, read these leaves in the open air every season of every year of your life, re-examine all you have been told at school or church or in any book, dismiss whatever insults your own soul, and your very flesh shall be a great poem and have the richest fluency not only in its words but in the silent lines of its lips and face and between the lashes of your eyes and in every motion and joint of your body.
—Walt Whitman, from the preface of Leaves of Grass 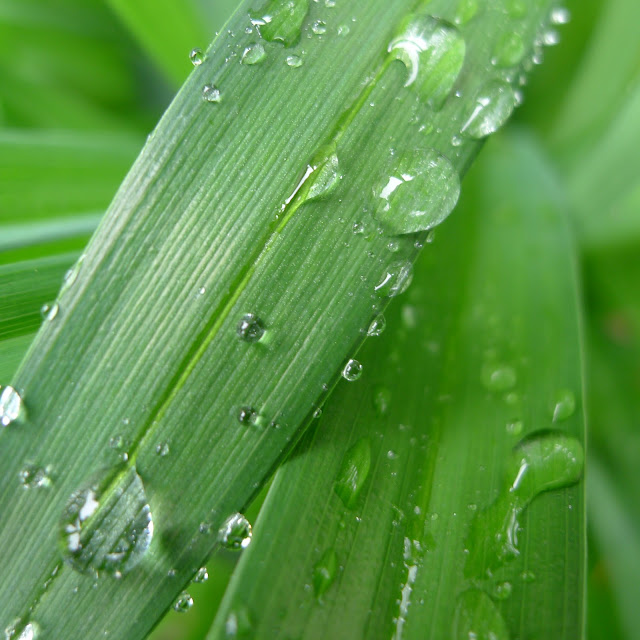