there's no sun due till sunday. for two weeks, i've been mostly holed-up inside. i feel the need to have a good cry. but somehow it's stubborn. hard to get out, though impossible to swallow. considering the state of things—putin's loathsome war against ukraine; musk's strong-arming of twitter; lying, scheming "patriots" in congress; a friend's premature death; grieving mothers, fathers, wives and children; calvin's broken femur and recent surgery—it shouldn't be hard to cry. tears should flow unrelentingly. but they're stuck somewhere in my thickening throat. i can feel them trying to push past my clenched teeth when i drift between sleep and dream, or suffer insomnia. sometimes a song will tug them along, nearly into existence—the soundtrack from melancholia; nick drake's river man; adagio for four strings. i so want the tears to spill. to let go from their headwaters, each holding a different emotion in its salty, quivering drop.
perhaps they're caught up in a knot of anger and resentment, despite the work i do to limit and loosen those emotions. to leave them behind. but i know those feelings are present and are maybe festering. sometimes I need to scream just to release them. i don't want them to breed or eat me from the inside out.
calvin had surgery last week on his broken femur—one of my worst nightmares—to reattach his femoral head to its bone using three cannulated screws. it was a somewhat long operation. he doesn't yet want to put weight on that leg. it dangles from its socket as if a pipe on a wind chime, hovering above ground like it did when it was broken two weeks ago at school. i hope the surgeon got it right and that calvin will be walking on it soon. today is his fifteenth day spent in bed playing with his baby toys, listening to music, eating his meals, cuddling with michael and me. i worry he won't again be able to walk independently. the notion is scary. angst and bitterness pool. i wish i could shed some tears, but for now they remain steadfast in their reservoir.
i sit here on calvin's changing table listening to music. steely dan's do it again comes on, and i hear the lyrics:
then you love a little wild one and she brings you only sorrow.
the words make me think of me and calvin, and i just about break down.
but then i hear an unmistakable noise in calvin's bed, and i know he's had a huge gooey poop, and i spend the next half hour wiping it up—off his skin, off his pajamas, off his socks, off my sweatshirt cuff, while trying to ensure he doesn't put his hands in it and so it doesn't get on anything else. and i could almost cry from sheer exhaustion. but i don't. the anger, angst, and discontent have their grip on me and are holding my tears hostage, at least—i think—until i can begin to see my boy take a few steps. until i have a sense this clusterfuck (excuse my french) may one day be over.
when michael comes home, i duck outside to walk the dog. the sky is gray. the ground is wet. i feel fatigued in a way i haven't often felt. i drag the heels of my green rubber boots along the gritty sidewalk as if i'm very, very old.
suddenly, the sky opens up. the clouds begin to sprinkle. drops fall on my cheeks, and something in me releases—the floodgates—and i cry a good cry, a long cry. and i walk along the street not caring if anyone sees my miserable, knitted face, because—besides a good night's sleep—crying is just what i need. 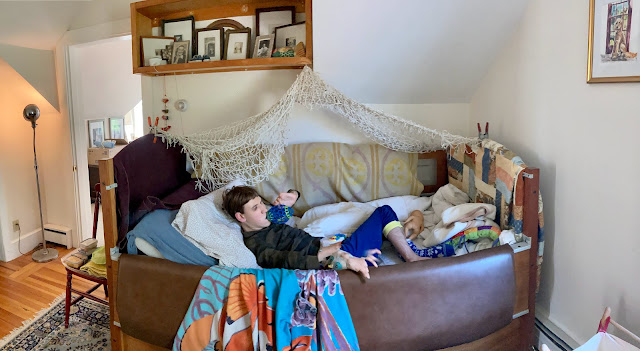