When I graduated from college my parents gave me a set of luggage because they knew I had a desire to travel, both for leisure and, hopefully, once I landed my dream job. I moved home, worked an odd job saving everything I earned, then backpacked through Europe for seven months by myself, visiting nearly every Western European country, stopping and working in Paris for a month, and dipping into Turkey for five weeks. Two years later I returned to revisit Greece, explore what was then Yugoslavia, spent a weekend in Budapest then joined my brother, Matt, for a four-week adventure in Tanzania, Kenya and Egypt. My entire trip lasted two months. Ten years later, I revisited some of the same people and places that I had fallen in love with on my first visit to Africa.

In my early thirties, I finally landed my dream job designing apparel, which took me often to New York City, a time or two to London, and to Seoul and Hong Kong. Then, the year before Calvin was born, Michael and I explored Brazil for three weeks, the country in which he once lived, long before we met.

My desire to travel runs deep, perhaps, in part, because I’ve always been attracted to “other.” I have a passion for ethnic and exotic foods, for the hustle and bustle of crowded plazas, for the melody of foreign languages, for the customs, sights, sounds, music and aromas which are unique to different people in different parts of the world, for the beauty, love and wisdom in unfamiliar faces, for the kindness of strangers, some of who took me into their homes.

But since Calvin’s birth, and more so since we began treating his epilepsy with cannabis oil, I’ve been unable to travel much. In the past five years, I’ve been once to my high school reunion in Seattle, once to New York City for less than twenty-four hours, and to LA/San Diego for four brief visits with my mother who was in the thralls of Alzheimer’s until her death last October. It has been over a decade since I’ve visited what was once my beloved home for as many years: San Francisco.

In these past five years I’ve ventured virtually nowhere fun with Calvin and Michael; we can’t take Calvin out of the state because of the absurd and hypocritical federal prohibition of cannabis, even for medicinal purposes. Besides that, Calvin would be nearly impossible to find safe sleeping accommodations; he’s too big for a crib and he’d fall out of a bed and/or get out, fall and hurt himself. The kid is a veritable accident waiting to happen. I’m kind of amazed he’s made it this far.

In that time span, Michael has traveled and photographed in Virginia, Georgia and Pennsylvania for weeks at a time. He was gone for nearly a month when he drove all of his equipment cross-country to Los Angeles and back to photograph its famous river, stopping briefly in Albuquerque to visit friends. Last fall he spent ten days away on a faculty research grant shooting photos of Hawaii's parks and plastic beaches. He’s scouted, photographed and fished in Idaho and Wyoming and spent three weeks at an artists’ residency in Virginia. This fall he will fly to Verona, Italy to oversee the printing of his forthcoming photo book on rivers, and next spring he’ll be in Paris for a three-week residency and a solo show of his work. I don't resent him. Quite the contrary. I am thrilled he can make these things happen and that I can help. I just wish I could go with him.

As for me? I’m going nowhere. Calvin is too complex and difficult for others to care for long-term, and we can’t take him with us, in great part because of cannabis laws. He's even difficult to take on local day excursions because he isn't able to walk around by himself and often balks at doing so with our help.

My high school reunion is in September, but without a nurse to help Michael, I’ll have to miss it for the first time in thirty-five years. And though I dream of heading somewhere—anywhere—with Michael, and even with Calvin, I don't think it will be possible for me to travel in the foreseeable future.

But as I write this I realize I sound like a whiner. I say that because I sit here at my desk looking out on a gorgeous garden of my making, dotted with fragrant blossoms, bees and birds. I realize how ridiculously fortunate I am to live as comfortably as I do, and to have once had the privilege of traveling far more than a lot of people do. I realize, that from my own little hunk of this world, I can imagine, dream and create. I can pour my passions onto "paper" and into the earth. I can remember all of the exciting places I’ve visited, and recall the interesting people I’ve met, from Alaska to Amsterdam, Rio to Rome, Lisbon to Louisiana, Madrid to Mt. Kilimanjaro, and Belgrade to little, old Brunswick, Maine. 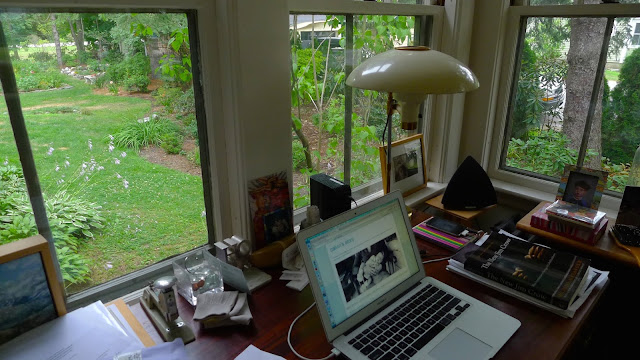 Posted by Christy Shake at 9:02 AM