Perhaps it's the gravity of the full moon that puts the world off-kilter and sends things spinning.

In the hours before the moon began to rise, my boy showed every harbinger of a grand mal: grousing, manic outbursts, foamy drool, rashy buttocks, shrieking, cackling, dropping down, huggier than usual, incessant eye poking. I had no doubt that, like the moon, a seizure was on the horizon.

At two-forty in the morning the seizure took grip, Calvin's telltale guttural scream announcing its arrival. His convulsions lasted the typical ninety seconds. I gave him his clobazam early. We changed his diaper. I crawled in bed next to him. I didn't get any sleep from then on.

I had seen the moon out the bathroom window thirty minutes before Calvin's fit. It hung there in its ominous beauty, partly shrouded by passing clouds like in so many horror films. I closed my eyes and imagined extreme tides, the women giving birth that night, the children having seizures, the folks doing dangerous and threatening acts—all things the full moon is thought to induce. I recounted the day's news of unhinged, ignorant, egomaniacal presidents, nuclear warheads, category-five storms, immigrant children—the best of the best who know no home but this America—threatened with banishment, and I wondered if the moon's gravity somehow yanks the egos and eccentricities of certain jackasses in power. But then I thought better, knowing full well that jackasses will be jackasses no matter the planetary alignment.

And then I heard the three-thirty train coming through. It rolled on by slowly, the grind and bump of its steel wheels percussively churning like drums. I imagined the engineer tugging on a cord to sound the whistle. This one does it with finesse, I thought. I've heard it before. It starts with a softness then gradually crescendos—not too loud—before falling off into the pulsing of the wheels and of my son's heart. The other drivers seem to thunder through town, blasting their whistle time and again like a child at the helm, or some reckless president. My engineer is a musician, the whistle his or her orchestra. No wonder they call them conductors, I thought, just as I realized I was drifting off to sleep, before that very realization roused me again.

Earlier in the day Calvin had had his first day of seventh grade. I met him at school, stayed a while, gave him his lunchtime meds. On the way back from the cafeteria we met throngs of students. I regarded the children, skinny, shoulder high and taller, seemingly twice Calvin's height. I saw my friend Andrew, the social studies teacher, and thought about what his students will be learning this year. You can really teach these kids things, I said to myself, both in remembering myself at that age and conscious of how little my own boy has been able to master, then followed the thought with notions of truth, virtue, kindness, compassion, inclusion, selflessness, charity. Then I wondered where people learn to be greedy and lust for power, wondered where they learn to fear and hate other.

As the moon slid behind some clouds, perhaps covertly tugging Calvin into his grand mal, I laid there hoping the next hurricane, Irma, will spare my in-laws in Florida, hoped the Dreamers will be free to stay, hoped that Kim Jong-un and Trump will see the gravity of their actions, agree to put aside their egos and put down their arms. Seems like peace between nations of our Earth should be ridiculously simple. Perhaps it would be in a world where Venus had more pull. 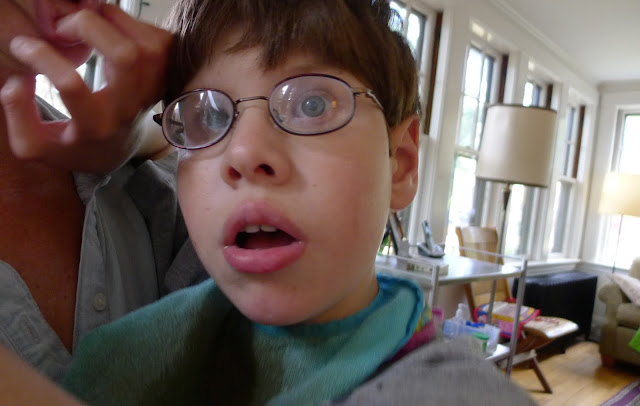 Posted by Christy Shake at 2:57 PM