I'm not one for praying, nor am I looking for answers as to why the world exists. I don't need evidence that there is life, intelligent or otherwise, on other planets. If I look to statistics and consider the magnitude of the universe, I already know the answer, which is yes. Though I lament life's miseries, I don't wonder why there is suffering in the world. Mankind can be cruel. Nature is indifferent. I only wonder, when reckless and despotic leaders war, oppress, starve and shell civilians, why others allow them to continue. But I guess I know the answer to that, too: power, money, conceit, control. I wonder why mutli-millionaires and billionaires aren't more charitable with the absurd profits they make on the backs of those who actually do the labor. Instead, they pocket those profits and too often pay starvation wages. These are the things I think about on days like this.

Last night at nine, Calvin had his third grand mal seizure in less than twenty-four hours. To stop the cluster I gave him Diastat—rectal Valium. It was the first time I had used it in months if not years. It has seemed to stop the seizures from advancing, but the real test will be whether he has more tonight. I don't know if Calvin is ill or if he is simply outgrowing his medication, or whether this worsening of clusters is an effect of eliminating his CBD oil recently. Like world torments, I don't question why my son suffers, at least not philosophically. As I said, nature is indifferent. But I would like to know the root of his weekly seizures, and I'll continue to search for ways to beat them into submission.

My thought this morning was to more seriously consider giving him the plant-based pharmaceutical CBD called Epidiolex. I've been following a Facebook page about the drug for months, noting its trends and side effects. It may be a last hope for Calvin considering he has failed ten anti-epileptic drugs. If we do decide to move forward with it, I'll likely put him on a fraction of the recommended starting dose. What I've noticed about CBD is that sometimes giving less is more effective and, like all drugs, too much can cause unwanted side effects including increased seizures.

Today my boy has been waking only for moments throughout the day, recovering from the assaults on his brain, and sleeping off the benzodiazepine. Though he is in a decent mood and seemingly content, I feel sorry for him. I've watched him seize thousands of times in his life. He sometimes turns gray-blue, bites his tongue and cheek till they bleed, may sometimes have vicious migraines and often appears woefully unsettled. Watching him suffer is punishing for me. Some folks believe that God punishes people who've sinned by doing things like "taking" their newborn babies, or rendering their children with afflictions, or causing natural disasters in liberal states, or allowing mass shootings in gay nightclubs. That is such bunk. The notion is so offensive, and I wonder how anyone could or would want to believe in a god that would behave that way.

Today, Calvin's buddy Mary came to watch him for a couple of hours in Michael's absence, so I was able to get outside with Smellie. The warmth of the sun offered respite amid a bitter thirty degrees. Some of the snow is melted and buds are beginning to swell on certain trees. I baked some chewy-crispy chocolate chip cookies for my friend who is now receiving Hospice care, though doing pretty well considering. In the garden, the greens of the Alberta spruce and the reds and purples of the small-leaf rhododendrons are gems right now. I wonder if we'll have an early spring. I'm hoping so. But you won't find me praying for it, because nature is indifferent. That's just the way She rolls. 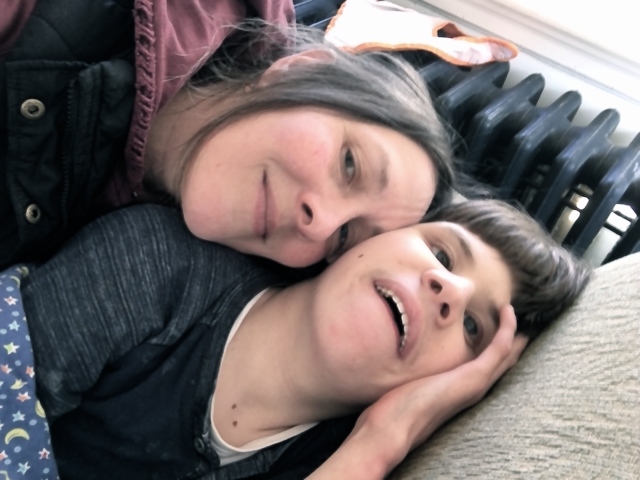 Posted by Christy Shake at 8:30 PM