The last month or so has been a mixed bag, much of it a bit of a disaster. At one point, midway through July, Calvin had had ten grand mal seizures in a rolling 31-day window. That's probably his worst stint (grand mal-wise) since being diagnosed with epilepsy when he was two years old. He ended the calendar month with seven grand mals, three focal seizures and one pain episode—night terrors? migraines? benzo withdrawal?—which we treated with ibuprofen, rectal THCA oil and, finally, nasal midazolam.

After the first bad stint of seizures, we decided to try reducing Calvin's Epidiolex, the plant-based pharmaceutical version of cannabidiol (CBD), which, over weeks, we had eventually increased to a dose of 90 mgs per day. Despite the fact that that dose is only half of the recommended starting dose for Calvin's weight, it seemed reasonable to reduce it for a few reasons: one, because high doses of artisanal CBD oils seemed to exacerbate his focal seizures; two, because his seizures had increased since starting it; and three, because his behavior has been so bad—lots of grousing and mania.

So, in the third week of July, we nearly halved his Epidiolex to 40 mgs per day, then a little over a week later reduced it again to just 20 mgs per day. Since then he's gone seven days without any seizures, which is no milestone, but it's better than having grand mals on three consecutive days.

In other news, Calvin is growing like a weed. The crown of his head reaches my nose, and my best guess is that he has easily topped eighty pounds. So, though he is still a shrimp for his age (though sixteen, he's the size of your average tween) he is getting bigger. And while growth is evidence of him thriving, he's getting harder to lift and handle.

Two days ago we started giving Calvin Milk of Magnesia to treat what we think is acid reflux which might be causing some of his manic outbursts. Thankfully, magnesium is known to be calming and it also treats constipation, so we were able to discontinue his Miralax, at least for now. Years ago, I remember reading that magnesium was being researched for its effect on seizures, so I am interested to see if it seems to help, though it might be hard to distinguish if any reduction in seizures is due to the recent decrease in Epidiolex or the initiation of Milk of Magnesia.

Thankfully, the past two days have been good ones. He's slept fairly well and been much calmer and happier despite the full moon. I'll leave you with photos taken yesterday, just up the river in Richmond, one of our favorite spots in Maine. 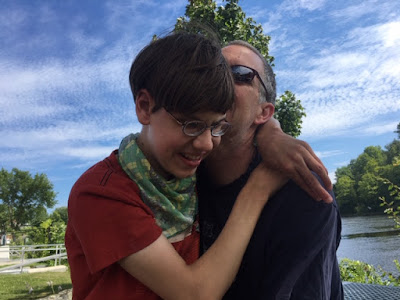 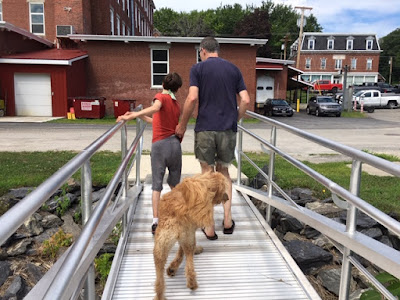 Posted by Christy Shake at 7:57 PM