keep on truckin' (toward justice)

Sweat trickles down my ribs. It's warmer outside than I guessed, but cool enough for a walk. I lead my son out the door, down the deck steps, then out to the field in back. Strolls with him have been more rare this summer than I'd like; it has just been too damn hot. As soon as we hit the path he balks. Yet again, I have to yank him along to keep him from trying to drop. With his left finger in his mouth, he looks slightly peaked and flushed, but nearing our goal, I refuse to give up. I keep on truckin'.

There used to be a time when Calvin could hold my hand and walk with little trouble. His gait was better, his balance more sure, his forward momentum, dependable. Now, if I don't tug him along, he stops in his tracks and stares at the sun. Sometimes he teeters backwards and I must catch his fall. The entire way I have to right him when he careens and stumbles. I worry that his brain's epileptic assaults are impeding his progression.

We just barely manage to make it around two corners and past Woody's empty house, but by the end of it I'm cursing and beginning to sob. I want to scream and punch a wall. So many hours, so many years, so many obstacles, yet so little progress. What a difficult, stressful situation, I think to myself, his and mine. It takes Calvin part of forever to scale the four back steps. I'm despondent. Spent. Empty. I'm weary of other, stupid, niggling troubles. Our nation is a hot mess—a reckless president whose mixed messages, indifference and neglect has led to a largely uncontrolled pandemic with 180,000 dead, a faltering economy, mass unemployment leading to millions without healthcare, civil unrest—and yet some folks want four more years of him. Black men, women and children keep getting shot by cops and vigilantes, their necks crushed by knees and chokeholds until they pass. Away. Beyond. Gone. Though these heinous incidents are legion, too many people still insist they're anomalies. But where are the scores of videos of unarmed White folks getting killed by cops? White-supremacist mass shooters and vigilante killers are handled with kid gloves, even as they tote the guns used to shoot people. They're described by some as "patriots" and "mother's sons," the latest's right-wing backers praising him for being executioner. Black victims, on the other hand, are routinely maligned as thugs. Their histories are picked apart and tarnished, their whereabouts, motives and movements questioned even after their lives have been tragically and unjustly snuffed out. Enough is enough.

As I reread the start of my last paragraph, I'm reminded of the civil rights fight in this nation. It is eternal. Burdensome. Exhausting. In too many ways, regrettably fruitless. Attaining racial justice in this country is a slog. A part of forever has passed, yet too many people still insist on being arbiters of the oppressed—deciding their truths, how they speak, where and how they should live, where and how they move, behave, dress, celebrate, grieve, protest, vote, perish. I understand Black anger and anguish to be immeasurable, something most of the rest of us can't fully grasp, save the indigenous who continue to fight similar injustices.

Calvin and my imperfect, burdensome life-walk is lamentable. But there are those who face worse dangers, stresses and impediments because of implicit bias, societal and systemic racism—we're talking cumulative trauma over 400 years. I think of the righteous who have the decency—not to be confused with courage—to proclaim that Black lives matter, and to protest the gross inequity we see played out daily in housing, healthcare, education, employment, voting, policing, courts and prisons. Though painfully slow and halting, there is a forward momentum toward racial justice which must advance for our nation to live up to its original promises. To attain it, we have to be fearless. We have to be relentless in our efforts. We can't give up.

As Reverend Dr. Martin Luther King, Jr. said, The long arc of the moral universe bends toward justice. Perhaps it's just around the corner, so keep on truckin'. 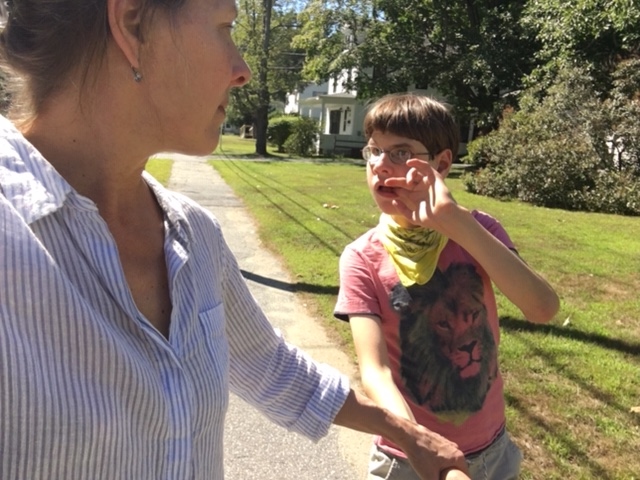