gut punches (and others)

Reading the news Friday night felt like a gut punch.

"Oh, no!" I cried out, upon learning of Supreme Court Justice Ruth Bader Ginsburg's death, my verbal reaction reminiscent of Michael's response when he heard that a dear friend had taken his own life.

On the heels of my grief and disappointment over the news of RBG's passing came the regrettable recognition that the current administration would move quickly to replace her, no doubt with a nominee apt to, at the very least, kill the Affordable Care Act and its mandate covering preexisting conditions, broaden avenues for continued voter suppression, and subvert (further) the body autonomy of American women.

My mind went into a frenzy recalling myths about abortion and the ways in which conservative men, for the most part, have for decades worked hard to politicize and legislate (away) women's reproductive health and freedom by limiting access to birth control, and by further diminishing the reasonably small window in which most abortions are allowed to be performed. Republican-led, mostly-male legislatures continue their aim to tighten regulations and mount burdensome hurdles so as to strictly limit the number of the nation's abortion clinics making it difficult for women, especially those who are poor, to access safe and legal procedures. Consider, too, the disingenuous pro-life claims, borne out in attempts to stifle proven, best methods of preventing unplanned pregnancies and abortion, such as free and accessible contraception, family planning and comprehensive sex education. Despite the fact that neither the Old Testament nor the New mentions abortion—not one word—many people cite their religious beliefs as the basis to condemn it. Noteworthy, too, is that Christian women make up nearly two-thirds of those who choose to have an abortion.

I became further vexed pondering the fact that many who profess their belief in the sanctity of life also support capital punishment—state-sanctioned murder—while still others suggest allowing abortion in the case of rape or incest, thereby belying their pro-life claims. And what of the growing number of Americans like me who aren't religious, who don't buy into the notion that a zygote or fetus has more rights than its pregnant mother, who don't condone the legislative and punitive coercion of women to carry unintended pregnancies to term? Should the religious freedom of some Americans supersede the basic human rights of others? I don't think so. Moreover, consider the fate of malformed fetuses which will endure brief though agonizing lives if their mothers and fathers are not allowed the option of sparing them certain pain and suffering after birth.

All the while—incomprehensibly, if not for the current patriarchal paradigm—the subject of making accountable the male impregnators never seems to enter the political discourse or legislative debate regarding abortion. How convenient. This continued strangling of women's reproductive rights and personal empowerment and freedom is insufferable—a literal and figurative gut punch. And the stomach-churning truth is that now, with RBG's death, the specter of yet another diehard conservative on the Supreme Court makes women's hard-fought sovereignty as precarious as ever.

Obviously, I'm pro-choice, which is not the same as pro-abortion. However, were I aware early in my pregnancy the extent to which Calvin's brain anomaly would lead to his miseries, I wonder what I would have done. I think I know, but I can't be certain. Regardless, I don't believe I have the right to decide the outcome of other women's planned or unplanned pregnancies, which impact their mental and physical well-being, the stability of their families, the trajectory of their careers, and the health risks to themselves and/or their unborn.

At a time when over three-quarters of all Americans support a woman's right to choose, and when one in four American women access abortion, the passing of Justice Ruth Bader Ginsburg leaves American women vulnerable to a handful of privileged, conservative, male, Supreme Court justices, all with Catholic roots. As deft as these conservative justices are on the Bench, I have my doubts that they are capable of fully considering, from a woman's unique perspective, the sweeping risks and considerations, the threat to very private, personal and constitutional freedoms and equal access to life, liberty and the pursuit of happiness that unintended, unhealthy or hopeless pregnancies—or a government mandate to take those pregnancies to term—may represent.

As I mused on the terrible dilemma of losing one of America's best champions of gender, religious and racial equality, I recalled The Notorious RBG's use of a statement by the abolitionist, Sarah Grimké:

I ask no favor for my sex; all I ask of our brethren is that they take their feet from off our necks.

This November, get out there and vote. Know how to vote in your state. Vote early. Vote by mail. Complete your ballot carefully and put it in your city's drop box. Be prepared for long lines if you vote in person. Vote as if your healthcare is in peril. Vote as if your or your partner's reproductive rights are at risk. Vote as if corporations have more rights than you do. Vote as if your right to vote is in jeopardy. It's all hanging in the balance.

Now is not the time to pull any punches. 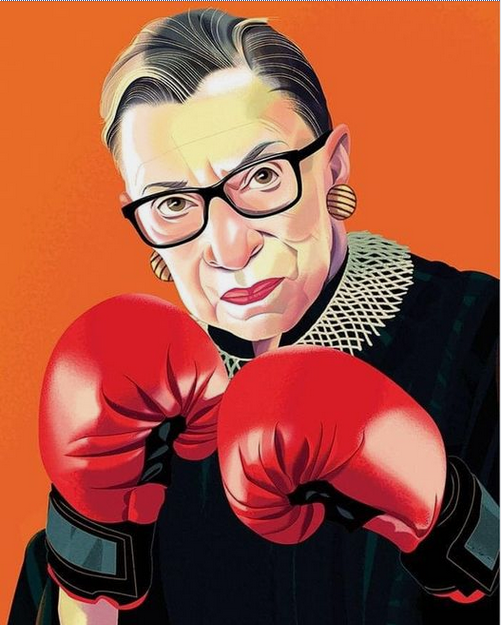