On too many days during the past three-and-three-quarters years, I'm reminded that if my son Calvin had lived in Hitler's Germany, he'd have been among the first to be swept up by Nazi thugs, then executed in the regime's first systematic "cleansing" of "undesirables." In the name of extreme nationalism, millions were rounded up like animals and slaughtered: the mentally ill and physically disabled, the elderly and infirm, homosexuals, Romanis, Jews and others.

Last week, I heard and read about the murder of yet another unarmed Black man at the hands of police, this time in Rochester, New York earlier this year. His name was Daniel Prude. He had left his brother's house in an erratic, psychotic, state. His brother called the police for help. Instead, Daniel became another victim in this nation's historic and present trouble of violence against Black people.

It was nighttime in March. By the time the cops arrived, Mr. Prude had taken off his shirt and long johns and was running around naked in the cold. The officers handcuffed him and put a spit mask over his head. Even as Daniel pled with officers to remove the mask, they held him down, his face pressed into the pavement, until he passed out and his pulse stopped. Though he was revived in the ambulance, he never regained consciousness. He died seven days later.

We know of dozens upon dozens of stories like this—unarmed Black men, women and children being murdered by police and vigilantes. Each account is sickeningly reminiscent of past ones—Jacob Blake, George Floyd, Breonna Taylor, Eric Garner, Tamir Rice, Philando Castile, Trayvon Martin. Unless we as a nation do something different—unless we reform the police and evolve as a society—these atrocities will continue.

Despite gains made during the Civil Rights Movement, Black people in America are still treated by many in law enforcement and others as subhuman. As if animals, they are falsely feared and made into monsters. They are regularly maligned as criminals. The Black Lives Matter movement is vilified as sinister, though their platform is righteous and inclusive, its simple goals dignity, opportunity and equality for Americans who, since slavery, continue to be exploited, terrorized, lynched, targeted, marginalized and abused. Some people's refusal to say, Black lives matter, serves as ample evidence of the need to underscore that very truth.

I worry about the well-documented infiltration of racism, White supremacy and far-right militancy into our nation's law enforcement, and its subsequent effect on communities. I understand what a privilege it is to have white skin and to jog, drive, jaywalk, shop, hike, play, loiter and prank with impunity. I know what it is to be the mother of a child who is misunderstood and undervalued by many. I read too many accounts of boys with autism and other mental health problems being killed by ill-trained police. I hear other's messages which are conveyed to me in real words and expressions of contempt and indifference:

Look at that kid. What's wrong with him? Shut that child up. Why can't she control him? He doesn't belong here. He's disgusting. I don't want to have to look at him. Pretend he doesn't exist.

I see a similar contempt for and misunderstanding of Black people and their movement. I hear people scapegoat and victim-blame African Americans, hear people regularly assign criminality to Blackness. I hear their message in words and expressions of contempt and suspicion of Black victims:

He must be guilty of something. If only he had complied. He had it coming. He was a monster. The officer feared for his life. He had drugs in his system. It looked like he had a weapon. Why did he run? He shouldn't have been there doing that in the first place.

Yesterday morning I heard an excerpt from a James Baldwin essay entitled, The White Problem. Though written in 1964, it still resonates today:

The people who settled the country had a fatal flaw. They could recognize a man when they saw one. They knew he wasn’t anything else but a man, but since they were Christian and since they had already decided that they came here to establish a free country, the only way to justify the role this chattel was playing in one’s life was to say that he was not a man. [Because] if he wasn’t, then no crime had been committed. That lie is the basis of our present trouble.

I consider, again, the state-sanctioned murder of innocents and "undesirables" in Nazi Germany and in this nation. I lament the dog-whistle politics of the current administration. I say a secular prayer for the men and women who are fighting for equal justice in a nation that still hasn't atoned for its sins or lived up to its original promises. I think about my new pen pal who is on death row, whose first letter to me was humorous, heart-rending and tragic. He doesn't deserve to be there; no one does.

As always, I muse on my son Calvin who, though nonverbal, autistic, physically and intellectually stunted and disabled, is as worthy and lovable as any of us. Then, I imagine those like Daniel Prude, whose lives were snuffed out in the street as if they didn't matter. No doubt they were worthy and madly lovable too. 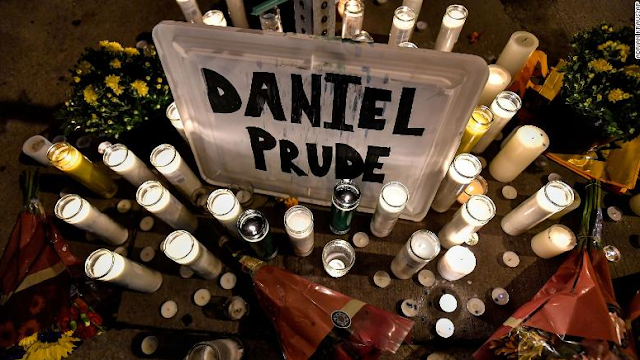