my little wonder brings me up and brings me down. he makes me smile. he makes me frown. he's the sweetest kid in the world. he's cute and handsome, incredibly peculiar and so messed up. sometimes he's unbearable. always, he makes me think and feel deeply. i wonder what emotions he's capable of feeling.

i wish i could get inside his head. he's impossible to figure out. i wonder what he dreams, wishes, needs, wants. i wonder what, if anything, he worries about. does he know he's treasured, resented, loved? does he have those feelings about us?

what does he experience when a seizure is coming? pain? panic? fear? euphoria? this morning he had his third grand mal in just thirty-one hours. in our grogginess, we decided to give him the rectal valium to stop the cluster. so difficult to know what is best when it comes to these drugs. what's too little? what's too much? have the drugs actually caused this clusterfuck? what if we had never given them to him at the start? would he still be seizing after all these years? have the drugs ruined our son? these are things i so often wonder about.

today will be spent parked on the faded green couch. my boy is mostly out of it—listless, unsteady, feeble. he's silent, calm, needy. my neck is aching. he keeps craning his toward the sun. i sense he's not yet out of the woods. more seizures coming. i can feel it in my bones. no wonder i so often come undone.

perhaps today i'll get some rest. maybe read a little. write some. stay out of the heat. cuddle my son. try to move beyond the worries that keep me up at night—regret, failure, lost opportunity, despair, dread. i'll keep wondering what goes on inside my little boy's head. 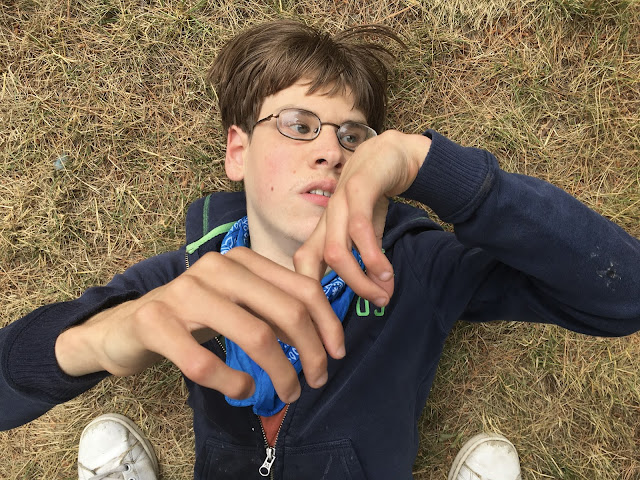