Calvin and I spent New Year's Eve in the ER. It was the first New Year's Eve in decades that I've stayed awake past midnight! Calvin and I both got some sleep, but were interrupted numerous times at ungodly hours for exams, IVs, blood draws, vital signs, a CT scan, an X-ray, and an unsuccessful attempt at getting a urine specimen. Through all of it, my ailing, tired and uncomfortable child was a superstar.

Earlier that day, we went to see the doctor because Calvin had been experiencing waves of excruciating pain—pain so bad it seemed as if he were being stabbed in the gut repeatedly. The doctor ordered a blood draw. Later that night, she called to tell us that his pancreatic marker, lipase, was three times what it should be. She advised us to go to the ER immediately for possible complications of acute pancreatitis. The blood draw at the ER, however, showed a normal lipase level, and the CT scan indicated that his pancreas looked fine. The ER doctor noted, however, that there were a handful of gallstones she said we should keep an eye on.

The CT scan also revealed a case of aspiration pneumonia in the lower part of Calvin's left lung, possibly caused by regurgitation stemming from his case of viral gastroenteritis. They sent us home the following morning with a prescription for a two-week course of antibiotics. Still, my gut tells me that his pain may be stemming from the gallstone(s).
Despite the exhausting array of tests and interruptions, the care at our local hospital ER was amazing. Those folks work their asses off, only to be abused by rude and unruly patients (one man was screaming at them in the hallway in the middle of the night. My guess is that it was about wearing a mask. I feared he might get violent.)
Right now, Calvin is safe and sound in his cozy bed in hid dad's arms with his favorite toys. Since coming home, I've been able to go for daily runs. On New Year's Day, despite feeling like hell, I was grateful I could run out at my beloved Pennellville on such a beautiful, misty and balmy morning. As I ran, I thought about the hell we regularly go through with Calvin—some Hades worse than others. But in later recounting New Year's Eve to Michael, who had finally left us in the ER around eleven o'clock that night at my urging, I realized how amazing the whole experience was. With tears in my eyes, I related to Michael how the CT-scan technician, Matt, had put the lead vest on me as if he were helping me with my jacket at a dinner party. His concern for me and Calvin was palpable in the grace and gentleness he exhibited.
I went on to ponder our fortune at being admitted to the ER by my dear friend, Michelle, who is a nurse and whose daughter, a classmate of Calvin's, is very much like him. She gave me tons of hugs and assured me we were in good hands. Also, upon arriving at the ER, we were greeted by a kind, elderly gentleman. I don't remember his name, but while we waited with our limp and listless boy slumped in his stroller, the man approached to visit with us. He wondered, based on having heard me say our address, if we might be affiliated with nearby Bowdoin College. We told him that Michael teaches photography there.
"My son used to teach there," he replied, then told us his son's name, which didn't sound familiar.
"He died eighteen years ago ... from cancer," the man said, and as I expressed my sorrow, tears welled up in his eyes.
He went on to mention his daughter-in-law, who also teaches at the college.
"Yes, we love her! She has donated many times to epilepsy research on Calvin's behalf!" I told him.
Just then, a bed in the ER became available, and so I gave the man a hug goodbye, while wishing we could sit and visit longer.
Later, in reviewing the events of New Year's Eve, I realized, despite its myriad stresses, what a rich experience that night had been. I recognized, that while I wasn't touring Manhattan or Rome or Los Angeles or Iceland, I was having a profoundly memorable experience, perhaps more meaningful than if I were at a party with friends or traveling the world. It became clear that the strangers I met that night really meant something to me intimately, even if our encounters were fleeting—and maybe Calvin and I meant something to them.
Slowly, Calvin is recovering. He's drinking fluids again and taking a bit of food—applesauce, banana, dry toast and, today, nonfat yogurt. His bouts of pain have mostly passed. We will take him to see a general surgeon tomorrow to discuss his gallstone(s) and whether he needs to have his gallbladder removed. I hope not.
In the meantime, as I spend most of these days nursing Calvin—changing his diarrhea diapers, taking his temperature, giving him meds, offering fluids and food, cradling him in my lap as he sleeps—I'll continue to ruminate on the manner in which we rung in the New Year, which, no doubt, I'm not likely to forget, except, perhaps, when I run. 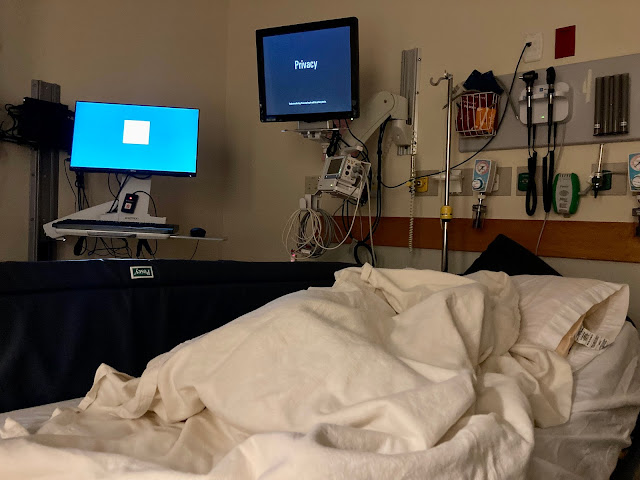 Posted by Christy Shake at 8:27 PM