It happened in the bath ... again. The past several seizures that Calvin has suffered have all begun in the tub. This one was very similar to the others—the silence, the twitching, the stiffening, the tremulous convulsions, the vacant staring eyes, his lack of breathing.

I was downstairs removing ash from the wood stove in preparation for building a fire when I heard a faint call from Calvin’s nurse, Bebe. I dropped the metal ash pan on the brick with a sharp clang and sprinted up the stairs. She had him—almost to our bed—in a kind of bear hug, her arms wrapped awkwardly around his thin, stiff body, which was partly draped in a towel. She gently laid him down and I kissed his moist neck tasting the bathwater trickling off slick locks of his hair. “Come on, baby,” I pleaded. Michael joined us and we all caressed Calvin’s quivering body.

As the second-hand approach three minutes Calvin had started coming out of it. I dismissed myself to quickly prepare his evening seizure meds while Bebe and Michael got his diaper and pajamas on. A few moments later I heard Calvin shriek. When I got back upstairs he was howling in obvious pain of some sort, feverishly rubbing his ears and head with a tortuous expression on his face. Could it be a headache? An ear infection? Cramps? Does he need to vomit? Any—all—were possible in the wake of a tonic-clonic (grand mal) seizure. There was no calming him enough to give him his seizure meds, so we dimmed the light, tucked him into our bed and he promptly began to settle, thumb in mouth.

But we had to get those chalky pills in, had no option but to disturb Calvin’s calm. Irritably, he took the first three white dots, all sunk into yogurt, like the dutiful boy that he is. We praised him heartily. The next two and a half sickeningly pink pellets he didn’t swallow, but instead began to cry. I had to tip his head back far enough so the mediciney tincture wouldn’t dribble out of his mouth, yet keep it propped up enough to prevent him from choking. All the while our sweet boy cried bitter tears. I so wanted to join him. Thankfully, he was accepting of a little liquid from the bottle to wash down the dissolving pills. Then we chased them with the last two-and-a-half innocuous looking baby blue tablets plus a few more spoonfuls of yogurt before his eyes became heavy with sleep.

Recently, I’d told Bebe how hard it is to start back at day one after a long seizure-free stint. Yesterday was day forty; today is day one. It’s a bitter pill to swallow, this epilepsy thing, hard not to choke on. It seems no matter how many drugs we dump down our little Calvin’s throat the seizures keep on coming and everyone involved gets sick to their stomachs with pain, suffering, grief, loss and heartache. And, no matter what we do, regrettably, somehow we keep ending up back at day one.

It's astounding what just one share of Calvin's story does to promote epilepsy awareness. Please do so.
Give: http://www.calvinscure.com 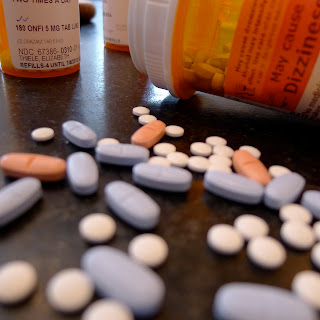