Not like the brazen giant of Greek fame,
With conquering limbs astride from land to land;
Here at our sea-washed, sunset gates shall stand
A mighty woman with a torch, whose flame
Is the imprisoned lightning, and her name
Mother of Exiles. From her beacon-hand
Glows world-wide welcome; her mild eyes command
The air-bridged harbor that twin cities frame.

"Keep, ancient lands, your storied pomp!" cries she
With silent lips. "Give me your tired, your poor,
Your huddled masses yearning to breathe free,
The wretched refuse of your teeming shore.
Send these, the homeless, tempest-tost to me,
I lift my lamp beside the golden door!"

—Emma Lazarus
In 1903, the poem was engraved on a bronze plaque and mounted inside the lower level of the pedestal of the Statue of Liberty.

Like most Americans, my ancestors were immigrants, some making the long and treacherous journey to escape the perils of Ireland’s potato famine, others traveling from Spain and landing on Sir Francis Drake Beach north of what is now San Francisco. They left their families and risked their lives to make a better future for themselves and their loved ones in a land that was not theirs but that became home. Millions had come before them and millions followed, making this a great nation of immigrants, rich in diversity and in its stories of struggle, courage and hope told by immigrants and born of survivors of Native American massacres and of the ugly scourge of slavery.

Recently, I had a conversation with a woman about the decades-long wave of undocumented immigrants coming to this country to make better lives for themselves and for their children and as refugees escaping the murderous threat of drug cartels, child labor, human trafficking and hunger. They come to work hard and to contribute. They come bearing hope. She complained that these immigrants don’t pay taxes, so I pointed out that indeed they do, at the very least paying sales tax while many also pay income tax. Later, while discussing a different topic, she admitted to not paying taxes on the tips she makes at work. I tried hard to grasp her rationale, which to me seemed like a double standard, but I came away more perplexed than when we began, and it lead me to check myself for hypocrisies in my own behavior, which no doubt I have.

Lately, I've heard a rash of folks grousing about undocumented immigrants living in this country. It’s always the same list of gripes: they don’t speak English; they don’t work; (and yet) they’re taking our jobs; they’re on the dole; they’re criminal; they don’t pay taxes; they don’t contribute. I wonder if these protesters personally know any undocumented immigrants and where they get their information. Perhaps they employ them, underpaying them to pick their fruit, pack their meat, clean their homes, care for their children.

I remember a conversation I once had with an American man who said that Mexicans—who make up the largest group of undocumented immigrants living in this country—are a bunch of lazy crooks. He’d come to the conclusion because he’d briefly visited a large Mexican port city and had either been pick-pocketed or had heard that pick-pocketing was rampant there. I pointed out that all major port cities worldwide are likely rife with con artists. I asked if he knew any Mexican people, had any Mexican friends, and he refused to answer. I asked why he thought Mexicans were “stupid and lazy.” He replied, “Just look at the state of their economy.” I asked him if he thought Depression-Era Americans were stupid and lazy. He didn’t answer and instead turned his back and walked away.

The stories I’ve heard of undocumented immigrants are of people no different than ourselves. They're hard-working people, men, women and children hoping for a better life, hungry people, ambitious people, good people, loving people. They risk their lives, just like our ancestors did, to make a better future for themselves and for their families. I imagine if I lived a life like theirs and if I were desperate enough, I would do the same for Calvin and for myself. I'd risk crossing that border and hope with all my heart that I'd be given a chance to prove myself, a chance to contribute, a chance to thrive in this place we once lovingly and proudly thought of as the Mother of Exiles. 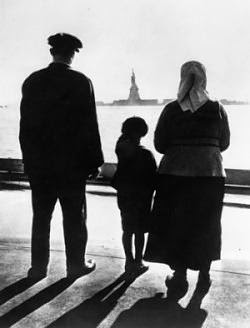 Posted by Christy Shake at 2:12 PM