the quality of cannabis

This morning I read a report about cannabis and its affects on childhood epilepsy. The findings appeared mixed, though I felt as though its authors were trying to play down cannabis’s efficacy while highlighting possible, yet undetermined, downsides such as liver problems and effects on brain development, (as if those aren't two detrimental consequences of many, if not most, antiepileptic pharmaceutical drugs.)

As I prepared Calvin’s lunch, an ice storm brewing outside, I wondered if over time Calvin might begin to have trouble with his liver because of the cannabis oils.

“It wouldn’t be the first time,” my husband reminded me.

No. It wouldn't. The first time we saw initial indications of liver problems was when Calvin was just three years old. He’d been taking Depakote, the third anticonvulsant he’d been prescribed within a year of being diagnosed with epilepsy. Depakote wasn’t working to control Calvin’s seizures, though it was doing a great job of sedating him and robbing him of skills he had just begun to learn. While in the hospital after a bout of status epilepticus his neurologist informed us that he was switching Calvin to a new drug, one called Lamictal. But because it would take several weeks to safely titrate to a therapeutic level of Lamictal in order to avoid serious, if not lethal, cases of toxic epidermal necrolysis or Stevens-Johnson syndrome, Calvin had to temporarily remain on Depakote.

The neurologist ordered a Depakote blood level. I asked the phlebotomist if they were also going to test Calvin’s liver enzymes, aware that Depakote was known for wreaking havoc on the livers of kids like Calvin. She told me, no, that the doctor hadn’t ordered them. I insisted she take them because Calvin was a hard stick—difficult to draw blood from easily and painlessly—and I didn’t want them to later require a second blood draw. She relented and took the levels, which came back ten times higher than the normal range, indicating impending trouble. The doctor had no choice but to take Calvin off of Depakote immediately, replacing it with two additional drugs—one, a benzodiazepine related to Valium.

As freezing rain glazed the streets and sidewalks outside varnishing bows and branches with ice, I continued to think about the cannabis. Since having started Calvin on a second oil a month ago, one high in CBD and CBDA, he seems to be happier, calmer and more alert, even sleeping slightly better at night. These are the same kinds of improvements we saw last spring almost immediately after starting him on a cannabis oil high in THCA, which he is still taking. It’s too early to tell if the new oil is lessening his nighttime seizures since, in the past several months, he has them only every six to nine days. But I am cautiously optimistic since I am seeing other improvements, like less self-stimming such as finger snapping and eye poking and reduced mania in the days leading up to a seizure. Luckily, Calvin is on a very small dose so there is lots of room to move.

I talked with Michael further about cannabis’s unknowns, and wondered how I would feel if Calvin died from liver failure if it were the result of giving him cannabis oil, (though it can as easily happen because of the benzodiazepine he was prescribed years ago.)

“He has seemed so much happier lately,” I remarked while watching Calvin spin in his johnny-jump-up mouthing his blue football with abandon, “and he seems to have an improved sense of well-being.”

Michael agreed, and in doing so reminded me that in life, when it comes to quality versus quantity, we’ll always choose quality. And as far as I can tell, since starting cannabis, Calvin is experiencing a whole lot more in the quality department. 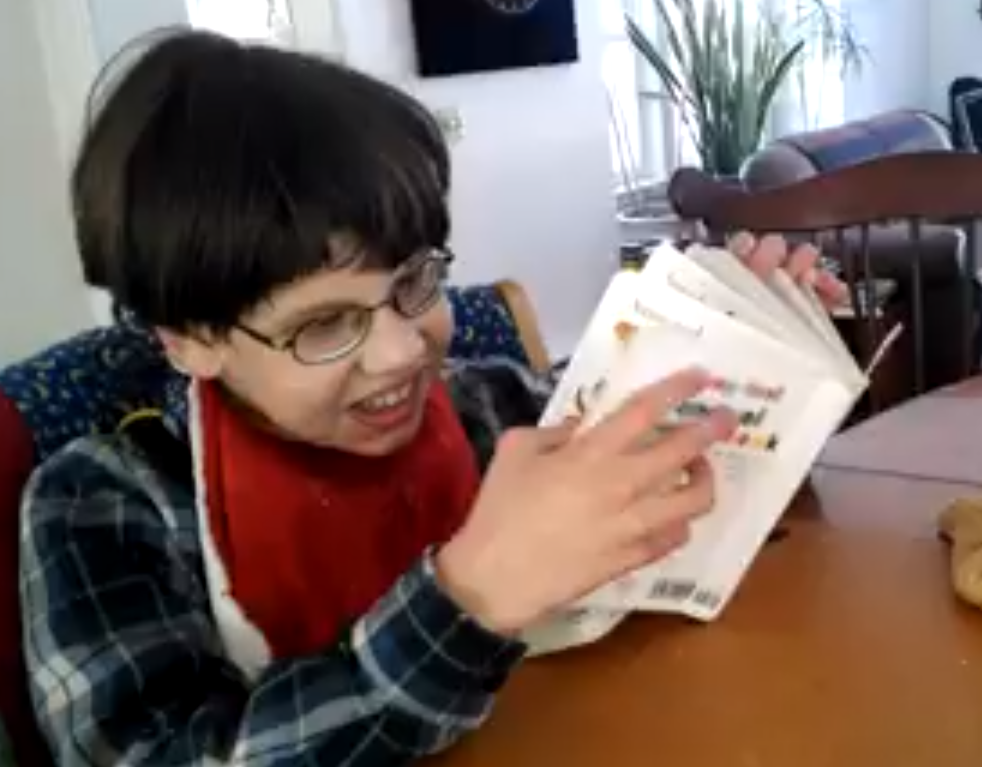 Posted by Christy Shake at 5:09 PM