anatomy of a greeting part ii

“Happy Holidays, eh?” my gynecologist said with a smirk as she walked through the door to find me wrapped up in a flimsy gown perched at the edge of the examination table thumbing an equally flimsy tabloid. She was referring to the fact that, just minutes earlier and within earshot of her, I had thanked the nurse for the greeting she'd given me rather than being wished a Merry Christmas, even though I understand and appreciate the sentiment.

My doc went on to admit that she wishes everyone a Merry Christmas, even her Jewish colleagues, because in her mind everyone celebrates Christmas.

“It's a secular holiday,” she insisted, pointing to its roots in pagan tradition, and while I agreed that the December holy day likely spawned from celebrations of the solstice, it remains a Christian observance at heart. When I expressed my slight disfavor of the default Christmas greeting she offered me a snarky, "Happy Kwanzaa!"

“So, don’t you buy presents or decorate?” she asked, somewhat incredulously. Without explaining my non-Christian beliefs, I told her, no not really, though I admitted in the past having decorated a tree from time to time, that I strung a few lights this year (more in honor of the solstice), and that we traditionally cook a nice meal on Christmas day just to feel—

“Included?” She said, finishing my sentence with a word I may or may not have chosen.

“I’m not going to change what I say because I might offend someone,” she retorted. I countered with the complete opposite argument underscoring my great desire—in the charitable spirit of the season—not to ostracize anyone.

Our volley was cordial, though beneath the gown my heart was pounding and I had to focus hard on regaining control over my nervously shaking legs, which by now were in the stirrups. To concede something in our debate, I cited my penchant for political correctness as the basis for my liberal stance. She expressed her disdain for political correctness telling me that my chosen greeting of Happy Holidays, was "bland."

“Bland?” I asked. “Perhaps insensitive,” I said after a hmmmm, and I told her I’d have to think about that one.

She hugged me before exiting and wished me Happy Holidays. Then I bid her a Merry Christmas, and we chuckled.

Over the next couple of days I did think about it—a lot. If I know for sure someone celebrates Christamas, I do wish them a merry one. But is wishing someone Happy Holidays bland? I asked myself. Or, is issuing a greeting like Merry Christmas—one that ignores all other belief systems—the true whitewashing, the real milk toast? Can we really assume everyone celebrates Christmas? No, we can't. We shouldn't. Doesn't the richness and spice come in acknowledging all of the different ways people celebrate the season—Jews, Buddhists, Christians, Muslims, Africans, Hindus, Pantheists—in one inclusive greeting such as Happy Holidays, a greeting that has been around for at least a century?

The next evening, over pizza and bourbon, I discussed my encounter with my dear friend, Barbara. She concurred, adding that if a person has never been in a position to be hurt or slighted, marginalized or maligned, it’s easy to think that their words are innocuous, such as members of the majority—in this part of the world, white Christians—most who have never had to deal with the pain, isolation, discrimination and oppression of being “other.”

"Does your doctor know about Calvin?" asked Barbara. I told her that, yes, she knows I have a disabled child with epilepsy, but because she didn't deliver Calvin and hasn't been following his progress, she likely doesn't know the extent of his disability: that though he is ten he has serious cognitive deficits, can't talk or read or write or use the toilet and is only recently beginning to do some independent walking. What I didn't tell my doctor during that conversation was, though Michael and I don't believe in Christian doctrine, one of the primary reasons I refrain from trimming a tree, why I don't buy gifts and decorate the house, is because Calvin is completely oblivious to Christmas and Santa and gifts. And so making merry over Christmas tidings and trimmings leaves a lump of coal in my throat for the joys we cannot fully partake in because we cannot delight in them with our child.

So again, our little Calvin helps me see our small world as a much bigger place, one that is not bland, but is brimming with rich and diverse traditions, beliefs, dogma and lore that I want to celebrate, embrace and acknowledge in the best way I know how, which is to make an effort to include everyone in my chosen greeting, be it Happy Holidays, Merry Happy or Happy Ho Ho. That way, I push no one into the margins, a place I know can be isolating, lonely and cold. 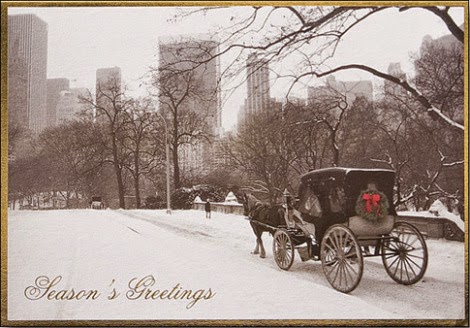 Posted by Christy Shake at 3:43 PM