Oodles of kids are spending their summers attending lacrosse camp or soccer camp or swim camp or are camping and fishing, hiking and biking and/or boating. Hoping to get in on some of the action and to feel some sense of normalcy—whatever the hell that is—I called up an organization called Pine Tree which runs a camp especially for disabled children and their families. I was encouraged, because what I'd heard about it made me think it might be a place Michael and I could take Calvin where he'd share something with his peers and where we'd perhaps enjoy a lakeside cabin experience. While filling out the online application, I came across a page outlining eligibility. I read aloud some of the requirements, answering them in my head as best I could.

Be able to interact with others, be cognitively aware that he/she is participating in a camp program, be able to participate in activities with other campers and respond to staff.

Be able to adapt to the group living environment of camp without disrupting others during sleeping hours, meals and program activities.

Be able to adapt to a staff supervision ratio of 1 staff to 3 campers.

Be free of emotional outbursts and capable of being able to restrain himself/herself at all times.

Be free of medical conditions that, in the opinion of our medical staff, may represent a danger to himself/herself or others. Each applicant will be judged on an individual basis, but as a general rule, A CAMPER IS NOT CONSIDERED A CANDIDATE FOR CAMP IF HE/SHE IS JUDGED TO HAVE A MEDICAL CONDITION ASSOCIATED WITH A HIGH RISK FOR COMPLICATION OR INJURY TO HIMSELF/HERSELF OR OTHERS.

Be on a stable seizure medication regime and not in the process of changing medication or altering the dose of current medication for at least one month prior to arriving at camp.

Sadly, my answer to all of these questions was, No.

It is not clear that Calvin would be cognizant of participating in a camp. Certainly, he would know he was not at home, but as for other activities and as for responding to staff and interacting with strangers, that would be a stretch at best. It's hard enough getting him to give our neighbor Woody a hug even though we visit him nearly every day.

As far as behavior goes, there is no telling when Calvin might go into hysterics, even if we paused his benzodiazepine wean, because side effects from the withdrawal are not linear or predictable and he's liable to disrupt other campers with his shrieks and manic laughing and flailing at any moment.

And when it comes to Calvin's medical condition, it is anything but stable and, again, because of his benzodiazepine withdrawal he can, at any time, go into status epilepticus, a serious prolonged seizure or series of hard-to-control seizures that can sometimes lead to death.

So I never completed the form and I resigned myself to yet another summer spent at home. And when I began thinking of it, rather than wallow in my sorrows, which I'm oh so very good at doing, I realized our home is Camp Hug 'n' Kiss, Busting Botanical Camp, Hubby Chef Camp and after about four or five o'clock its pretty much always Camp Cocktail. It's a place where Calvin is comfortable strutting the back yard and neighborhood streets, and where he can enjoy his johnny-jump-up and his numerous baths. It is a place, when Calvin is at morning school or is being cared for by his nurse, I can garden in relative peace and quiet, I can get a bit of writing done, where I can savor the amazing food that Michael cooks on a regular basis then hang out by the fire on star-studded nights—a baby monitor slung around my head—being forever grateful for what we have and knowing that Calvin is asleep in his safe bed and, if we need, a hospital is just minutes away. 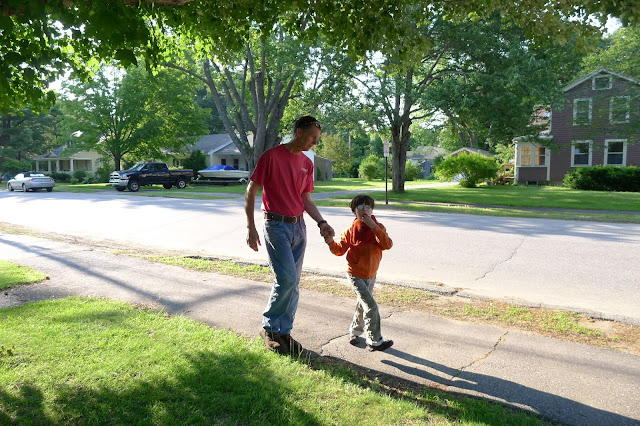 Posted by Christy Shake at 2:52 PM