A white sky belied the warm morning as Calvin and I rode third in a caravan hugging the winding road to Morse Mountain reserve. There, a pod of fifth-graders spilled out onto the dirt parking lot and gathered around their teacher, Mr. Shea. He introduced two new children to the class, one of them being Calvin, who sat in a stroller chewing his blue plastic football, at times shrieking and laughing.

“Please say hello to your new classmates,” he asked of them.

Only slightly nervous, I gazed into the crowd of children dressed in brightly colored garb and ready to embark on their midsummer expedition. They had turned their attention toward us and from the center of the solemn mob a cute boy sprang, approached Calvin smiling and, leaning over with his hands pressed together as if in prayer, said, “Hi, Calvin!” before waving to him. Weak in the knees due to the boy's gesture, I thanked him for his unreserved kindness, then several other students echoed the greeting to my son who is incapable of saying hello or waving.

“Calvin hears you, he just won't respond, but he knows you are there,” I assured them, patting my boy on the head.

After patiently listening to the park rules, the group set out with their backpacks, bug spray and water bottles while I remained to change a wet diaper in the back of the car.

“I’ll catch up!” I called to the stragglers who had turned to wait for us.

Our old three-wheel stroller handled the path with little trouble, bouncing a cackling Calvin along what had over years become more rock and rut than pavement, as if a dry river bed. It took no time for me to break into a sweat pushing sixty pounds up a rough hill through muggy air, but I soon caught up to the back of the happy flock.

Trailing them through the wooded serenity, I felt grateful Mr. Shea had included us in the trek, just as I'd been grateful when he—being one of few teachers to do so—invited me into his classroom to tell his students about Calvin and about epilepsy. I felt grateful to get out of the house with my gimpy boy, a jaunt I'd likely never consider doing on my own. I felt grateful for the worry-free feeling afforded me by the cannabis oil which has kept all but one of Calvin's daytime grand mal seizures at bay for over 300 days. My buddy Kim was there with her daughter Zoe, so I enjoyed the comfort and company of a woman who seems to appreciate my crude sense of humor. A couple of the other mothers who went as chaperons, Beth and Becky, introduced themselves to me, as well as the grandmother of the sweet boy who had first said hello to Calvin. Becky and her daughter Peyton paid great attention to me and Calvin and I was sad to hear that they'd be moving away. All of these things made me glad I hadn't chickened out.

Twenty minutes into the hike and with a little effort, I hustled the stroller up a steep hill to the top of Morse Mountain—really more like a large hill—for a view of the salt marsh blanketed in a fog obscuring the open ocean. The kids gathered around Calvin’s stroller for a photograph before heading back down toward the beach. At the fork in the road I veered left to make my way back to our car and home in time for Calvin’s lunch and seizure meds. Having said goodbye and left the group behind, the walk was quiet except for the buzz of mosquitos and the haunting song of a hermit thrush. Even Calvin was calm. Relaxed and unwound on the day after Calvin had hurt his foot, I felt myself melting into the backdrop of salt marsh and sea, casting my worries into the breeze, if only for a moment.

Before long we were back at the parking lot where Don, the attendant, was braiding dreamcatchers, bracelets, key chains, bags and necklaces made with found lobster trap netting, bait bags, rope, driftwood, feathers and shells. He and I had a nice visit before I had to feed Calvin a snack. He told me a little about his craft and shared with me his website, Sagadahoc Tribal Arts.

“Sorry, Don, but I’ve got to run the car for a bit while I feed Calvin," explaining that the heat and mosquitos were too bad to keep the windows up without the air conditioning.

“No problem,” he called, and went back to making dreamcatchers, just as the sun began burning through the morning haze. 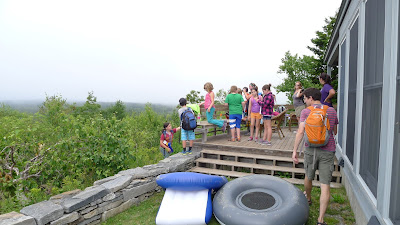 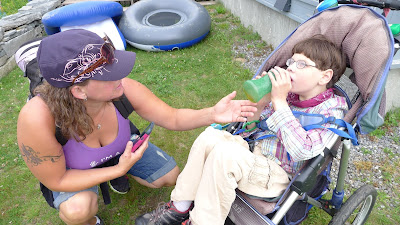 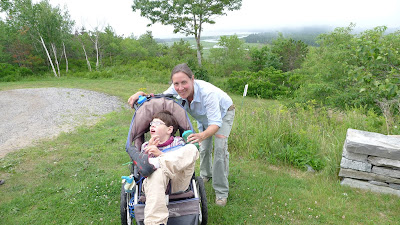 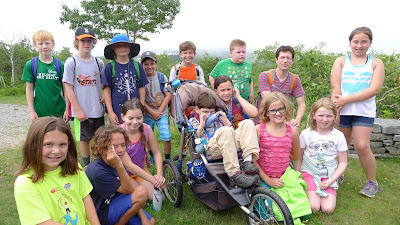 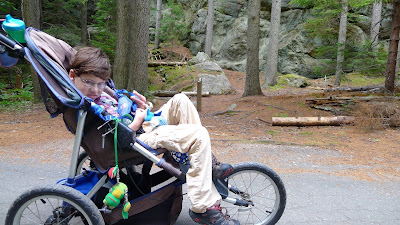 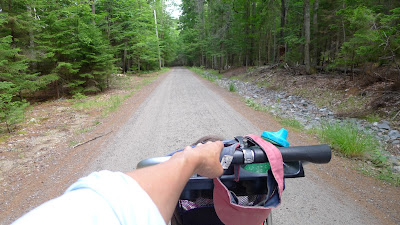 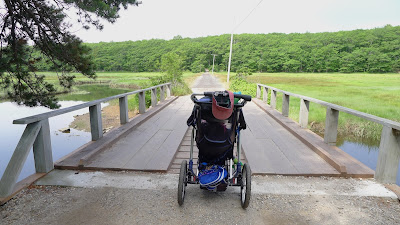 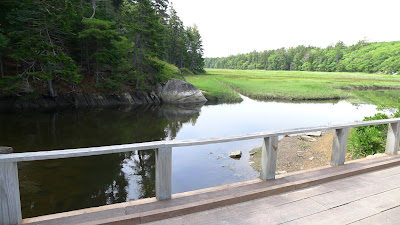 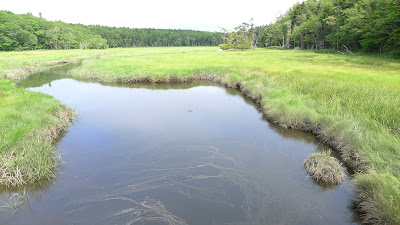 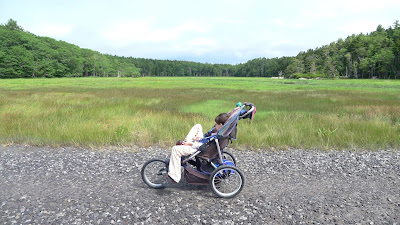 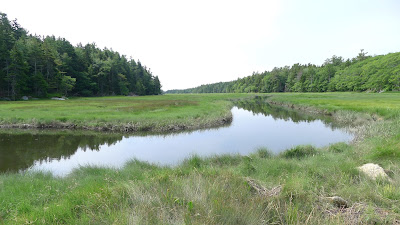 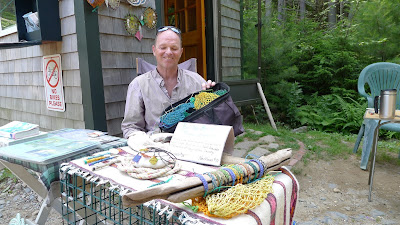 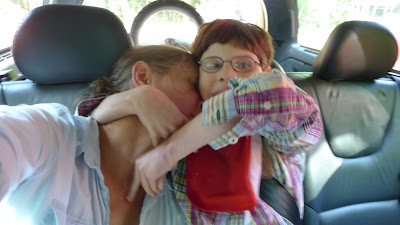 Posted by Christy Shake at 2:24 PM