For the first time in his eleven years, my boy sat on a picnic bench next to his father and took bits of ice cream from our cones, wincing at the icy treat on his sensitive teeth, yet going back for more. A year ago, Calvin did not know how to bite pieces off of a banana, much less lick or nibble an ice cream cone. Maybe one day he'll be able to hold a cone all by himself, though the prospect of that—something he used to be capable of doing before the onslaught of mind-numbing epilepsy drugs—seems light years away or, in other words, impossible.

Sunday was a scorcher, and humid, too, so we spent some of it in an air conditioned car and in a climate controlled grocer where Calvin stumbled down the aisles with Michael, teetering and drooling, squealing and flailing his arms as onlookers either smiled, averted their eyes or gawked with apparent disgust. Thankfully, most of the day Calvin was calm and collected, though at times his hugs were so intense I felt as if I were wrestling a giant.

Speaking of giants, the night before, Michael and I went with our neighbors to see the Mel Brooks' comedic musical, Young Frankenstein. I've seen the film a dozen times or so over the years, though not for a while and never the musical. It started off with a bang: amazing acting, singing and dancing peppered with lots of lewd jokes, which I adore. But when it came to the part where The Monster awakens from the dead, surprisingly my heart sunk into my shoes. The seven-foot-tall ogre sat up and grunted—moaned really—and I immediately thought of Calvin who, because of the clumsy way in which he walks, sometimes with arms outstretched, I often call My Little Frankenstein. Throughout the performance, whenever The Monster opened his mouth and let out a garbled groan, the audience laughed. In the second act, The Monster, misunderstood, hungry and thirsty having fled a throng of fearful townspeople, came upon a lonely blind man who invited him into his home. The blind man, whose motives were pure and brotherly, accidentally spooned hot broth into The Monster's lap, spilled his mug of wine before The Monster had a chance to sip, and lit The Monster's thumb on fire thinking it was a cigar. The scene, which had always been hilarious to me, now was a baffling mix of comedy and tragedy.

Despite my bittersweet response, I sat and enjoyed the rest of the show while also pondering the strangeness of folks laughing at a creature not unlike my Calvin: mute with an abnormal brain, misunderstood, feared by some, loved by others, a strangely behaving thus awkward looking, peculiar sounding wretch. I couldn't help but think that we were all laughing at disability, and I wondered what disability advocates have had to say about the Brooks' production these days.

Sunday night, sitting around a backyard fire, Michael and I chewed things over with our good buddy Matt. I told him how strange it felt to see and hear the awkward Monster—perhaps a grown-up, albeit green, version of Calvin—and how the crowd's response, indeed mine, messed with my perceptions, strangely twisting what I saw as both empathy and contempt for an odd monster. Matt mentioned other misfits, underdogs, of Mel Brooks movies: Cleavon Little who plays Bart, a black cowboy in a racist white Wild West and Gene Wilder who plays Jim, his rusty, sharp-shooter side kick in Blazing Saddles. We determined that in all three cases—Frankenstein's Monster, black Bart and Jim—the viewer is compelled to root for them and, in the end, they come out on top, the joke being on everyone else.

I suppose realizing this quashed my hurt feelings, but as I considered that The Monster—from the get-go so strong and virile—in the end became an intellectual, a perfect specimen of a man, I simultaneously realized Calvin will never live that romantic reality. He might instead one day become a six-foot Frankenstein in diapers, hobbling down the street cawing and crowing and growling like some kind of beast, townspeople scattering this way and that to avoid mishap, then turning in his wake and, like the little girl did on the park bench today, laugh at him as he passes. 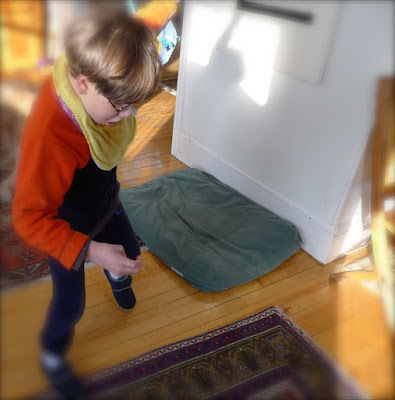 Posted by Christy Shake at 4:24 PM