Yesterday afternoon while he was playing with his toys, Calvin fell out of his safety bed and fractured his metatarsal, the foot bone that leads to the big toe. The break is more serious because it extends into his growth plate and, we were told by a physician's assistant, it could affect the development of his foot. We spent the good part of two hours this morning having it examined, x-rayed and imobilized in a fiberglass splint wrapped with ace bandages. The physician's assistant told us that Calvin would likely have to keep weight off of it for four to six weeks. That means we'll be spending much of our time thwarting his attempts at standing up, which is already proving to be difficult since all Calvin wants to do—all he really can do—is walk around the house, out in the yard, down the street and up and down stairs. Likely due to drug side effects and their withdrawal, he's not accustomed to sitting still ... ever.

I'm not yet sure how we'll be able to manage doing things like giving him a bath, but maybe after we meet with the orthopedic surgeon later this week we'll get a better idea and, perhaps, a better solution. And since Calvin isn't capable of using crutches, any walking is out of the question. Therefore, we'll be lifting and carrying him everywhere, and using a stroller a lot more than he'd like.

I feel guilty for not pulling the safety netting over his bed. Of late, I've kept the netting down more often, in part because it is so cumbersome but mostly because Calvin has seemed more aware of the danger of standing up in bed. I was wrong.

If I sound unfazed, it is only because of the blog platform. I'm in utter despair and spent much of today in tears. Michael tried to dry them and assuage my guilt. Woody and Lauren validated them. Luke and Sarah wooed them away with their boundless empathy, love and kindness. It is hard to shake the funk, however, when a child so chronically disabled who has to deal with seizures, drug side effects, withdrawal and poor digestion also has to deal with a broken foot. To make matters worse, he likely has no idea why he can't stand up and go where he wants to go. I'm heartsick.

I'm trying to tell myself that we will adjust. But it's hard to swallow just how significantly this will no doubt negatively impact what little independence Calvin and I both had when he could walk. 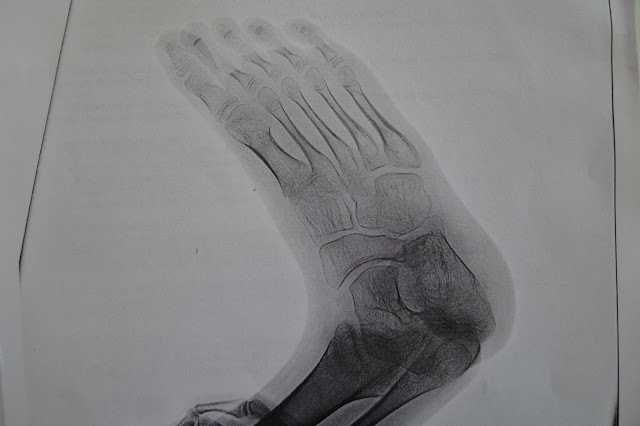 Posted by Christy Shake at 8:05 PM