Just a very quick post—I haven't much time this week to write—to mention that my brother, Scott, came for a visit from his home in Tucson by way of New York. His stay in Maine overlapped with the Kolster family reunion. He fit in well with the crowd, drinking beers and shooting the shit with my in-laws, cracking jokes with the gang.

His visit was too short; four days go by far too quickly. The last time I’d seen him was over eighteen months ago, nearly a year before Mom died. We talked about her and what a long and happy life she had lived, even with the Alzheimer’s. Over the few days we had together, we discussed life, triumph, guilt, remorse, responsibility and loss. We reminisced about childhood a bit, but mostly touched on a myriad of other topics such as relationships, the universe, and other things of non-political nature; Scott insisted politics was off limits.

Though Calvin has only met my brother a few brief times before, he took to Scott immediately. I think Calvin likes his scratchy head and deep voice, not to mention Scott’s fondness for hugs. I melted seeing them snuggle together, big smiles on their faces just chilling out.

When I dropped Scott off at the airport this morning I wept. Now that Mom is gone, I wonder if we’ll see much of each other. Our family has not been one for reunions; too many deep rifts between certain siblings. The last reunion we had was over twenty years ago when my dad turned seventy, the year before he died. It was pretty much a disaster, complete with harsh words and judgement, impatience, tears.

But what I’ve lost in one family I’ve gained in another: Michael’s. Scott reminded me of that same dynamic when I openly lamented the deep loss I feel daily having a child so seriously impaired as Calvin; he’s also been a gift.

As I look at the photo below I am reminded again of what my parents told me growing up, that Scott, as a six-year old, used to change my dirty diapers and feed me my bottle. It's no wonder he makes an amazing uncle. 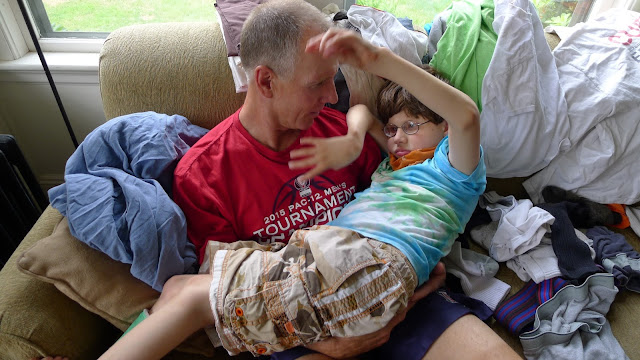 Posted by Christy Shake at 4:36 PM