Having spent the morning and a good part of the afternoon catching Calvin's mucousy bile in a towel every hour while struggling to keep him from going onto his back, which he is wont to do whenever he vomits, has given me added pause about heading to DC this Saturday.

For some time, I’ve been struggling with my decision to attend the Women’s March on Washington, with a small group of friends the day after this Friday’s inaugural abomination. I bought my flight on a whim, having not stopped to think through the logistics. Since then, I’ve been sweating the details: having to get up at three a.m., wondering if I have the right shoes and if my plantar fasciitis will flare up from walking all day, wondering if we’ll find a parking space at the metro, wondering if I’ll have enough energy, fretting not getting home until midnight that night and having to wake up Sunday at five-thirty.

I’ve been weighing the pros and cons ad nauseam. On the one hand, if I go, I’ll be part of a huge, inclusive and important movement calling for justice which, after all, is what I’m most passionate about fighting for. On the other hand, if I stay, I might be able to join a much smaller march with Michael and Calvin alongside a different group of friends in downtown Portland, Maine.

I’ve expressed my reservations to a handful of friends, telling them how I don’t like to make fear-based decisions, telling them I feel like a wimp for hesitating. Yesterday, though, I realized that I am not at all afraid to go; it’s worry and exhaustion that are paralyzing me. Were I in better shape or single, or if Calvin were typical and healthy, I’d likely have zero reservations. As it is, he’s a handful for me alone to take care of all day and night much less for Michael who doesn’t have his meals and meds and schedule memorized. Often, caring for Calvin is a job for two, especially when he is sick.

Yesterday, I returned to a sunny, partially thawed-out spot at the fields with my dear friend Maura. As Nellie bounded around, I lamented my misgivings about the march to Maura. She shared her own about a similar march she’s headed to in Boston and how she’d read some tips for demonstrators, one of which suggested that participants wear diapers because there’s nowhere to pee. In counting up pros versus cons, one of the pros of my not going is there will be one less person standing in line for scarce porta-potties, freeing up the space for someone who didn’t come wearing a diaper.

By late morning I had decided to see how it felt to imagine staying home on Saturday. I’d be able to apply the unused plane ticket to fly to New York in the spring, or so I thought. Further investigation, however, proved that Southwest Airlines doesn’t fly to New York from Maine; one more con to add to my list of growing concerns about staying.

Last night, the scales felt more balanced. It’ll be near sixty degrees in DC. Perhaps if I were to go without any expectations I’ll be more pleased. Maybe I shouldn’t worry about my feet hurting or about not getting enough sleep. As my husband often says, you can sleep when you’re dead. But the chance to raise my voice for equality, respect, inclusiveness, in the face of losing so many hard-fought rights to the incoming administration—including for disabled children like my son Calvin—the time to march is now.

But because of today, I've got really cold feet, and I'm back to feeling like I should stay and take care of business here. And maybe, if my kid isn't sick, I can march with my family in Portland, Maine. 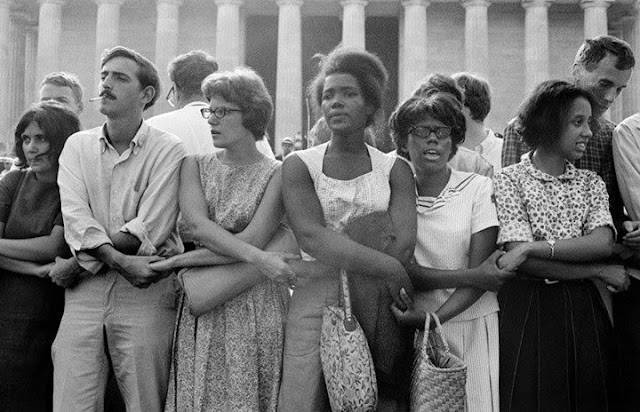 Posted by Christy Shake at 5:19 PM

Email ThisBlogThis!Share to TwitterShare to FacebookShare to Pinterest
Labels: advocacy