If it weren’t for what I’ve written in this blog these past six-and-a-half years, many of you might be unaware of the struggles one faces raising a significantly disabled child who suffers from a chronic condition as heinous as epilepsy. This blog is a platform from which I can raise awareness, hoping, with my words, to inspire greater compassion and understanding for individuals and families who endure burdens sometimes beyond most people’s comprehension.

I write so parents teach their children not to fear or bully kids like Calvin. I write so society doesn’t shun families like mine. I write with the hope that folks think twice before judging us and others like us with our sometimes manic and often peculiar children. I write so readers better understand marginalization and inequity and then question the bitter contempt they, or others, hold for anyone who looks or acts or sounds different from themselves.

This morning, I read an opinion piece titled, To-Do List for the Actors and Actresses Who Want to Turn the Oscars Into Political Programming, written by a young white conservative man named Justen Charters. He starts by applauding Lady Gaga for not making her Superbowl halftime performance political. His comment made me wonder if he had paid much attention to the show. I mean, not only did she revel in singing what some might consider the Gay anthem, but she chose Woody Guthrie’s, This Land is Your Land, no doubt in my mind a rebuff of Trump’s attempt at disenfranchising so many in this nation.

Charters goes on to chastise actors and actresses for making the Oscar’s into a political platform, for taking the stage and speaking against racism, sexism, xenophobia, bigotry and the current administration's attempt to oppress and malign non-White, non-Christian people living in—and desperate refugees hoping to come to—this nation. Charters' suggestions that actors take their political advocacy outside of the celebrity event and instead make documentaries about immigrants, and go "to a place where women are in dire need of help” in order to fight for women’s rights, proves his obliviousness to actors' long and active history of championing against inhumanity (think Ashton Kutcher, Angelina Jolie, Eva Longoria, Olivia Wilde, Kerry Washington, Matt Damon and George Clooney to name just a few).

I think of writers, filmmakers and actors—as much as musicians, painters, sculptors and photographers—as artists. To me, the best art is at its very core political. It not only makes us laugh or cry, it causes us to be introspective, then begs us to think about the world around us and to question our place in that world. Moreover, artist-actors are role models, as Charters points out in his opinion piece by citing millions of fans worldwide who pin up their posters and pictures on bedroom walls and “wait in line for hours just to get their autograph or take a selfie.” At the Oscar's, these role models have a unique platform from which to challenge injustices in the world, hoping to inspire others to be moved into advocacy. And as celebrities, their voices amplify what millions living here and fearing this new regime experience, feel and believe is unjust and immoral.

Since beginning my blog, I've been told by an angry troll that I shouldn't use it to talk politics. I've been told by a sibling that my posts are considered too long and depressing. I'm sure I have readers who bristle when I discuss my disdain for organized religion. But I've also been told by others—many who struggle with children like Calvin—that I am their voice because they are too shy, feel unable to express themselves adequately or who fear reprisal from friends and family if they do. So by writing this blog, I am able to amplify what hidden voices ache to say but hesitate. For them and for me, I will not self-censor. Along with sharing triumphs, I will keep talking about uncomfortable, unfortunate things, all things disability and all things epilepsy. And I will keep talking politics and injustice with the hope of turning just one mind in the direction of compassion, understanding and acceptance of others who look or act or sound different from themselves. 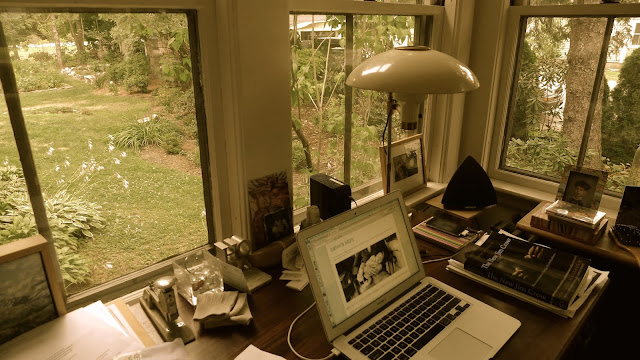 Posted by Christy Shake at 9:15 PM