Behind the wheel of a big red pickup, an old man of some girth in a ball cap and t-shirt, his elbow fat as a country ham resting out his window, slowed then stopped, calling out to us and nodding at our son.

I understood his tone, was pretty sure I knew where he was going.

"Yes," I said, approaching his truck.

"I've got a grandson like him. Do you know Susie?" Then, gesturing with a wave of his mitt, "She lives just down the road a bit. Her boy is like yours. I love that kid so much."

I put my hand on the man's shoulder and patted.

"They've got their ways like we don't," he continued in a husky Mainer's drawl, "They're lovely."

"Yes they are," I replied with a smile, aware of the line of cars forming behind him in the dusty parking lot.

"You all have a good day," he said as he pulled away. I wiped a tear across my lashes, my throat thickening with emotion. The Windsor Fair had welcomed us well yet another year.

Calvin did okay at the carnival, considering how manic he had been on the ride north. It was worth noting that he walked further and more willingly compared with the past two years at the same event. Still, he attracted more than his fair share of gawking children and some adults, and I thought about how people like him might've been the attraction at freak shows and carnivals in centuries past.

And though Calvin didn't regard the animals, feed any of the riotous foul, pet any bleating sheep or milk any cows, he did sit next to me in the shade on a park bench and eat the lunch I'd brought along. He didn't have any seizures that I know of—and I should note here that since starting him on THCA cannabis oil, he has had only four daytime grand mal seizures in over three years (he now has virtually all of them at or before dawn, when he is safe in bed sleeping, eliminating most of my anxiety over daytime excursions.)

The drive home included some additional mania, and I noticed his pimply nose and the rash on his face and buttocks, all signs a seizure is brewing. But he'd had a fair day overall, and so I was heartened.

Still, at five-thirty this morning—day ten since the last grand mal—the seizure hit. While Calvin convulsed, Michael kissed his face and I rubbed frankincense oil on the bottoms of his feet, put dabs of it on his big toes and under his nose. After the fit was over, I gave him his benzodiazepine—now just 1.3 mgs daily, down from a high of 35—and crawled into bed with him.

Spooning my shivering boy, I dreamed of yesterday's puffy white clouds, the roar of jet engines clawing the sky, the feel of splintering paint on Woody's front porch, the clink of ice cubes in glasses of bourbon, the smell of cotton candy, fried onions and barbecue, of straw and country sausage, and the goat-like bleats of my lovely child. 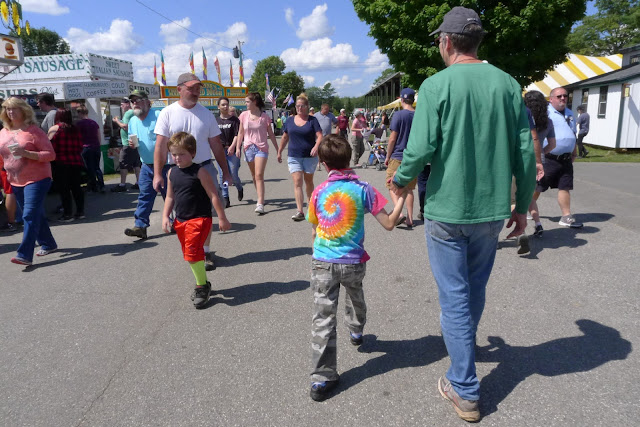