I remember being eager to meet my child for the first time. Rubbing coconut oil on my pregnant belly after a swim, I wondered what he'd be like (I was pretty sure I was going to birth a boy). Would he have blond hair like I did as a toddler? What color would his eyes be? Might he grow up to be tall and thin like his dad and my father? Might he become a world traveler? A teacher? An artist? A writer or musician? I dreamt about all kinds of things we'd do together, mother and son.

I had often wondered what I'd do if I were to have a disabled child. But, like any of us, I never truly believed it would happen to me. After all, I was so very healthy, especially after I quit my toxic job.

And then, two weeks before Calvin was born, doctors told us that something was terribly wrong—the lateral ventricles in our baby's brain were enlarged, possibly due to bleeds in his brain.

Yesterday, I held my tiny fourteen-year-old child in my arms as he seized on and off all day long. He had had two grand mals the night before, and he woke to another grand mal this morning. He's had more seizures in the last two-and-a-half days than he did in the entire month of September. I don't know what is going on.

Am I giving him too much CBD, or does he need more? Is he going through a growth spurt? I swear he is taller than just a few weeks ago. Are puberty's hormones causing this bad streak? Is he sick again? Is he experiencing a latent spate of benzodiazepine withdrawal?

I ask myself these questions often. Yesterday, while coaxing Calvin to drink even the slightest bit of water, I realized no one would do what I do for Calvin, not even in a hospital or nursing home. In some ways I feel more like his nursemaid than his mother—safely lifting him from his bed to his changing table and back again, taking his rectal temperature, monitoring his bowel movements, giving him daily suppositories, sometimes having to digitally remove his stool, syringing water in his mouth when he won't drink, giving him rescue meds when waves of seizures come, researching new medicines and treatments for epilepsy, constipation etc., making THCA cannabis oil, trying to collect urine for laboratory testing by placing cotton balls in his diaper, waking up scores of times nightly to check on him, lie him back down and cover him, tend to him if he is seizing.

After the third grand mal in as many days, plus the unknown number of partial complex seizures in-between, Michael and I decided to give Calvin Diastat—rectal Valium—to stop the cluster. So far it has worked. What I do next, I am not certain. I'm not a doctor, and neurologists rarely, if ever, have the answers. So I'll have to consult with other parents on social media, and I'll have to trust my motherly gut, and employ my nursemaid power. 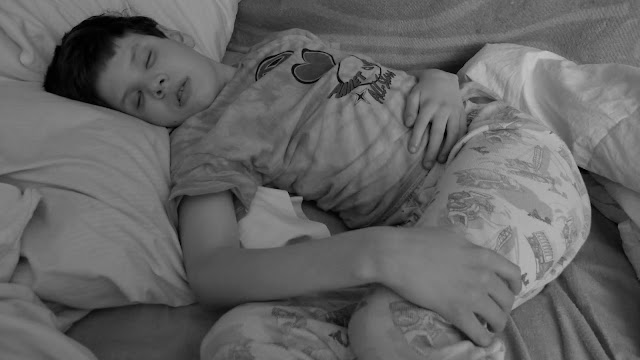