too good to be true

"Godammit!" I cried, whipping the covers off and scrambling to our seizing child. It was the first of two grand mals Calvin suffered on either side of midnight last night.

Calvin's good behavior was an inadvertent gift for Michael's birthday, a day my husband has never liked much. He prefers, in most ways, for his birthday to be a day like any other—no pomp, no fuss, no gifts, no attention. Instead, he made one of his favorite meals—stovetop spareribs braised in onions, white wine and serrano pepper aside creamy mashed potatoes and impossibly thin asparagus. After we ate, I brought out the mint chocolate Oreo ice cream cake I had made while Calvin was at school. Although we are both tired and overextended, it was turning out to be one of his better birthdays.

Regrettably, however, epilepsy has a way of ruining things—sleep, meals, celebrations, plans, hopes, dreams. Considering Calvin's good nature yesterday, the first seizure was somewhat of a shock; the second one, though half-expected because of the earliness of the first, a complete letdown. I told Michael that I had had a fleeting thought earlier that Calvin's good day might be too good to be true. I was right.

The three of us have been mostly awake since 1:30 this morning dealing with a wired child who doesn't appear to be out of the woods. After the second seizure, and for reasons I can never be sure of, Calvin spent several restless hours alternating between lying down and hugging me and sitting up with a rapid and pounding heart, clammy hands, trembling feet, and arms so crooked and fingers working so madly against each other you'd think he could spark a flame. Now he is in the jumper stomping, eye poking, fingering, clenching his teeth, and covering his ears, foamy drool bubbling down his chin.

Days like these nearly break me into little pieces. But there are things that save me from completely falling apart—writing, trying to focus on the knowledge that this too will end, gazing outside at the trees and shrubs turning orange, rose and yellow in the autumn sun, and listening to music hoping my son isn't winding up into another one. And gratitude. Gratitude for other things nearly too good to be true—a warm house, a fine, handsome, creative, talented, thoughtful, smart, prolific and loving husband, wine on the table, food in our bellies, electricity, hot water, indoor plumbing, art on the walls, dry basements, light-filled spaces, cozy fires, dear friends and family, enough clothes, enough money, decent health care and schools, reliable cars, leftover ribs, and mint chocolate Oreo ice cream cake in the freezer. 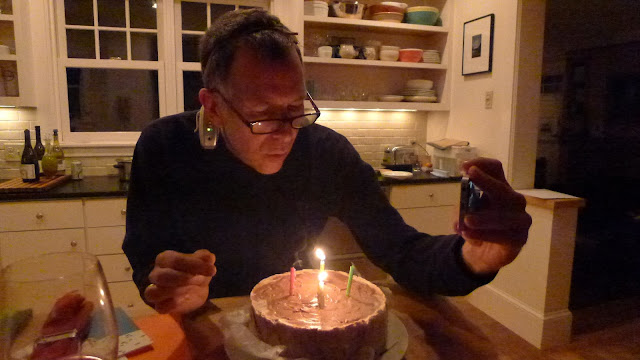