As sure as the new moon's looming arrival, I sensed my son's impending grand mal. Yesterday, my boy and I were both beside ourselves—he agitated and wired and I, as a result, flustered, anxious and distraught—trapped in a vicious cycle of his disturbing behaviors begetting my tension, perhaps begetting his stress and perhaps begetting a seizure. But who knows? Maybe this is just how this effing epilepsy rolls.

Nevertheless, I try to put my best effort into remaining hopeful that we can find a therapeutic sweet spot of CBD that eases Calvin's seizures. So far, the Palmetto Harmony seems to have done a decent job of quelling Calvin's partial complex seizures and, for a time, I was sure it was reducing his grand mals. But three grand mals in a span of thirty days between mid December and mid January has since doubled back to his previous average. No doubt, the uptick is depressing.

Amid this constant doubt and worry, I try consoling myself, knowing that his grand mals are self-limiting, that the convulsions don't last more than ninety seconds. Nonetheless, they are distressing. I try to console myself knowing that his overall number of annual seizures is gradually decreasing, in spite of the fact he is no longer on the benzodiazepine and is taking far less of my homemade THCA oil. I try to console myself by remembering how utterly unhinged Calvin used to be on high doses of three antiepileptic drugs several years ago. Granted, he suffered a fraction of his current number of seizures back then, but his behavior was unbearable for us—then, far harder than the seizures—and I cannot imagine he felt very good. We'd see him regularly crawling out of his skin, virtually without respite.

I try to console myself by the mere fact that we did not have to cancel a gathering of some of our favorite people to salute Calvin's upcoming birthday. Despite Calvin's downward spiral yesterday—and owing to our son's wonderful caregivers—Michael and I cleaned house and put out a modest spread, gussied up, cranked the disco, rock and funk, and stayed up late chatting, laughing, snacking, drinking and dancing. Letting loose with beloveds proves to be one of life's best elixirs for casting out the mean blues and reds. Within minutes, I de-stressed.

Just before five a.m., however, after far too little sleep, Calvin seized. Michael dabbed the blood trickling from between our boy's lips. I gave the little guy his CBD oil then crawled in his bed and held him close to me. He quickly fell back to sleep. An hour later he woke up agitated as he often does in the wake of a grand mal—eye poking, "ooh-oohing," sun-staring, tossing, banging, restless beyond measure. Too soon, I lament, to be beside ourselves again. 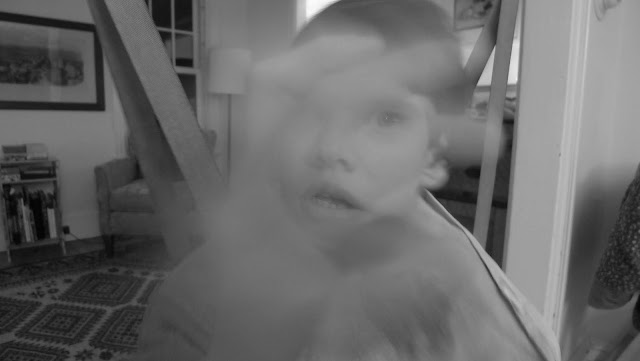 Posted by Christy Shake at 2:37 PM