I felt nearly like my old self last night—giddy, relaxed, excited, even a little rowdy—getting gussied up in some fancy duds I mined from Salvation Army. What you can't see in the photo below is that I am wearing tails over of the strapless, shirred-tulle dress. Comfy in my black patent flats, a bit of bourbon warmed me in the wake of an excruciatingly long, icy, frigid winter "vacation" week, which confined us to home with an oft-agitated kid. At six o'clock, I kissed Michael goodbye and headed south in the rain, carpooling with Freddy Mercury (my friend Vin) and two others from Queen (my buddies Aaron and Dan), to attend our friend Swifty's (my pal Tim) annual Oscar gala.

Thirty miles away, we were greeted by a venue filled with tulips. A throng of handsome men sporting tuxedos and dinner jackets, some dressed in drag, plus a smattering of women, drank Prosecco and hammed for the camera. In a rare, live performance, my buddies from Queen rocked their hit, We are the Champions, to the surprise of many happy onlookers. On three walls, a half dozen big-screen televisions broadcast the Red Carpet. Swifty, our most beloved and dapper host who always goes all-out, if not over the top, for his guests, was at his best emceeing the event. As the awards show began, we dined on delectable spinach salad, stuffed pork tenderloin, flaky haddock smothered in a divine white sauce, roasted root vegetables and penne. I might—just might—have gotten a little bit tipsy.

The night reminded me of parties I threw decades ago (has it really been that long?) in my sweet Haight-Ashbury flat, where scores of friends and strangers dressed in their finest threads rocked the house, eating good food, drinking probably too much, laughing and dancing. I'm in my best element at a good party, even more so when I can dance.

By the time we left the event, the crowd had dwindled to some hard-core enthusiasts, and the rain had stopped. On the way home, Queen sang Cameo's, Word Up, from 1986 as I listened awestruck in the backseat remembering what it felt like to be young(er) and unencumbered. I wished they'd sung hits the whole trip north.

It was just about eleven when I finally rolled into bed. In the attached room, Calvin slept soundly under his fleece and down comforters. Nellie and Michael were deep in dream state. Closing my tired eyes, I wished Calvin would make it through the night without any seizures, hoping he would manage to go back to school, because—shindig or not—this party girl needs some rest. 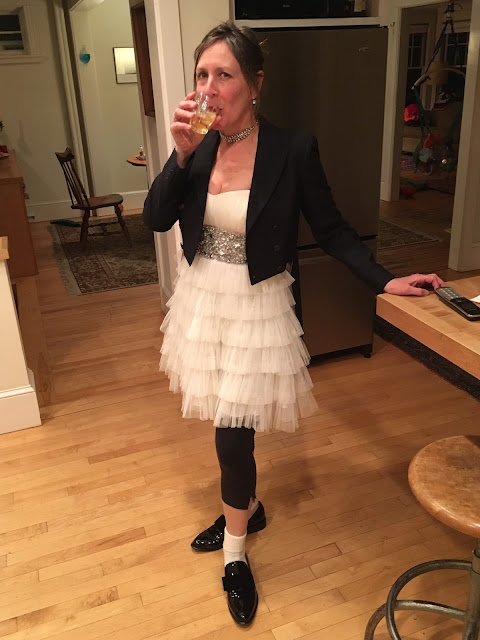