It was bound to happen, and it did so at three a.m. His scream was muffled, thus barely arousing me. Half asleep, Michael and I caressed Calvin as he seized, then I crawled in with our boy and held him, where I could hear and feel his pounding heartbeat. Our heads rested together on a soft cotton pillowcase that belonged to our dear friend who took his own life last summer, and whose birthday it is today. Somehow, it felt safe and right putting cheek to fabric that in sleep used to touch his well-missed face.

During Calvin's last spate of seizures, I grieved. In my mourning, I told someone that when I see Calvin suffer miseries such as seizures and night terrors, I am more accepting than usual of the real chance he might not live out his childhood years; no one wants to see their child suffer repeatedly. She said his death would be a blessing. She used that word. Others have, too. Rather than admonish her, I simply disagreed. And though her words stung, and though they were ignorant, I knew what she was trying to say and I knew they came from a place of love.

Yesterday, I wrote to an acquaintance who lost his grown son a few years ago:

your loss of your son resonates with me on some level. i think of that poem, "Vigil Strange I Kept on the Field One Night," by walt whitman, which i post on my blog most memorial days. in it, he speaks so tenderly of his "boy of responding kisses." with our sons, i believe we both have experienced losses of our own kind. and though we feel grief over those losses, maybe we have gone on to have relationships with them in unexpected, deep and meaningful ways—yours perhaps developing even after his death, and mine with a non-verbal, severely disabled one who i can never truly know or understand. of course, nothing can replace who or what they might have gone on to be, but somehow, despite that, perhaps we still have profound connections with them.

Still, I can say unequivocally that the loss of a child is no blessing.

A blessing is kissing and holding your child closely, as if it were their first or last day. 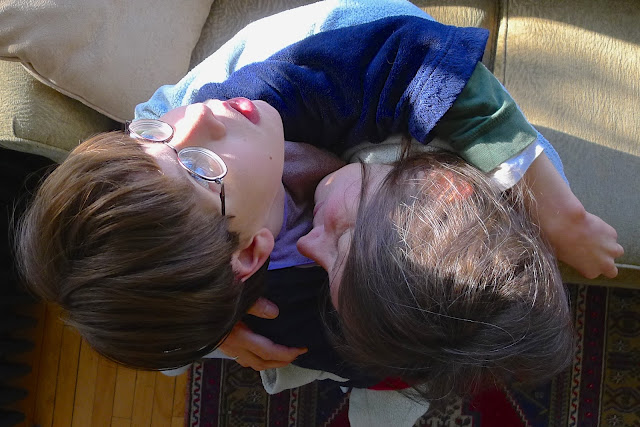