At the neurologist yesterday, I was very happy to report that Calvin hadn't had a grand mal seizure in twenty-four days—roughly four to five times longer than this year's average span—and that in the past thirty days he has suffered only three days of seizures (compared with a half dozen to a dozen or more in a month's time.)

Calvin's neurologist, a pediatric epileptologist, wondered to what I attributed the abrupt and substantial decrease of seizures in the wake of last month which was peppered with them. I told him I believed it was the recent reduction of Calvin's CBD (cannabidiol) cannabis oil. In mid March, after having experimentally increased it by thirty percent (to 145 mgs/day), then having seen a rash of seizures at the higher dose, we cut it by about two-thirds (to 60 mgs/day) and saw immediate results.

I saw the doc jot something down in his notes.

I spent most of the appointment asking him about other drugs and non-traditional options in case we ever want to try another pharmaceutical besides Keppra. I asked him about Tegritol, Trileptal, Briviact, vigabatrin, Vimpat, cuprum metallicum, magnesium, B12 and Epidiolex. Some of the drugs are primarily prescribed for focal seizures. One of them risks visual disturbances, including blindness. The doc had not seen any compelling medical literature on the alternative therapies I asked about, and confessed to being the kind of physician who relies heavily on traditional Western approaches, (namely drugs). At that point, I remembered how six years ago Calvin's pediatrician and I lobbied hard to convince him that cannabis oil, both THCA and CBD, appear to have decent track records for treating the most stubborn childhood epilepsies. Having finally convinced the neurologist that cannabis was reasonable to try, Calvin became the first patient in the entire Maine Neurology practice to get a recommendation to use cannabis to treat epilepsy. Several months after starting Calvin on a homemade THCA oil, his daytime grand mal seizures virtually disappeared.

When it came to discussing Epidiolex (the plant-based pharmaceutical version of CBD) the doc said he had about ten patients taking it. I asked if he was on the Facebook Epidiolex Discussion Group page. Not surprisingly, he said, no. I told him that I am, and that I'd seen a trend in comments from parents of children having success with Epidiolex at sub-therapeutic doses, i.e. starting and/or remaining far below the suggested starting dose of 5 mgs/kg, and that at high doses, in some people, it appears to make seizures worse. This is consistent with what I have read about whole-plant CBD oil, and what I have seen in Calvin. In other words, sometimes less is more.

Again, I saw the doc jot something down in his notes.

We left the neurologist's office with a plan for Calvin to undergo a 24-hour ambulatory EEG at home to compare his brain activity to previous EEGs, which were done many years ago. In the meantime, I'm waiting for lab results on my latest batch of THCA oil which I was forced to make with a new strain of cannabis called Mandarin Cookies. I'll be starting Calvin on it sometime this weekend, hoping the transition will be seamless, if not more beneficial. If all goes well, at some point in the near future, as I told the neurologist, we hope to reduce Calvin's high dose of Keppra to see if his behavior—his mood swings, manic laughter, hyperkinesia—improves. Perhaps, at least in Calvin's case, less is more with pharmaceuticals, too. 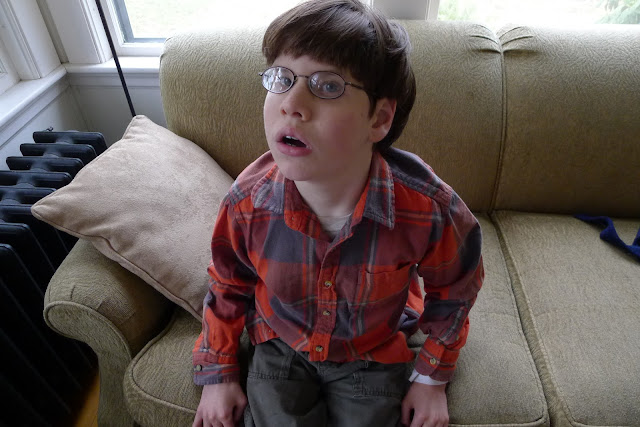