Again, our day began at three a.m. with the arrival of another focal seizure, the first of two, this one several minutes long. With the help of some extra homemade THCA cannabis oil, however, Calvin had improved by eleven, and so we set out for the Windsor Fair, a town or two away from the fair we went to a week ago.

Calvin did far better this time, even holding our hands and walking, though wonkily, willingly at times. Throughout the day we zigzagged our way between sheds of lounging cows and goats, cages of enormous sows with their week-old suckling piglets, and a raucous avian barn. All the while Calvin seemed to take it in, gnawing happily on his rubber chew toy and nibbling on snacks I'd cut up for him.

Several times I watched children and adults gawk at Calvin as if he were some freak in a carnival sideshow. When this occurs, as it does anytime we're in public, I feel a mix of sadness and anger. Sometimes I'm moved to act spitefully. I'd like to think they don't mean any harm; maybe it's human nature to rubberneck at a spectacle. Still, I often feel like an alien with my sweet little peculiar Martian, orbiting on the margins of things rather than feeling an integral part of the larger world.

When we had seen enough of the sights, we stood in line to get an ice cream cone. A handsome, dark-haired boy approached us and asked if Calvin might like to have the stuffed animal he'd won in a midway game. I fumbled to answer, fairly certain that Calvin wouldn't respond to such a toy, his go-to playthings being hard plastic and rubber ones. But I was compelled to accept the boy's kind gesture because I remember well what it was like to be his age.

The boy introduced himself as Landon. I suggested we try handing the stuffed animal to Calvin to see how he'd respond. Landon crouched down closer to Calvin offering him the toy, speaking to him directly and asking if he would like to have it. Immediately, Calvin hugged the larger-than-life emoji and began mouthing it with fervor. We were all amazed and happy when Calvin received the gift so emphatically.

Landon, who is as sweet a boy as you'll ever meet, and worldly beyond his years, told us he'll soon be thirteen. We greeted his dad and grandfather who were at his side, and as I spoke with Landon, his father told Michael that he had no idea Landon had planned on giving away his prize.

I took a quick picture of our newfound friends before shaking their hands and saying goodbye. After they turned to leave us, I looked up at Michael and noticed that he'd gotten quite choked up. Seeing his emotion, I began to weep openly at Landon's selfless gesture.

Random acts of kindness like these make our world go round. No doubt I'll rest my head on my pillow tonight thinking of Landon and how, if things had turned out differently, maybe Calvin would have become as extraordinarily thoughtful, fearless and empathetic as he.

If you are reading this, Landon, I hope you know how deeply you touched us and how much you made us feel welcome, important, and included, while so many others look at us as if we don't belong. You yourself are the gift you gave to us, one far larger than the sideshow prize that left your arms. How very lucky we are. 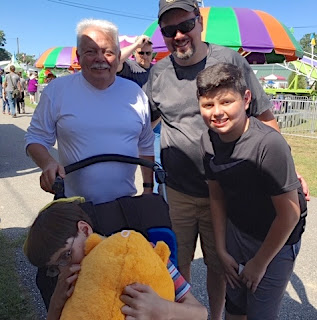 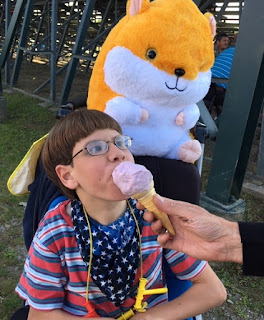 Posted by Christy Shake at 9:56 PM