it's been too long. time to check in. calvin went nine days between seizures. then he had grand mals the past two days, each at four o'clock in the morning. thankfully, we haven't seen any focal seizures in two-plus months. he's almost off of cbd oil. once we eliminate it we'll hold steady for a few weeks. might reintroduce it, try a new drug or not change anything at all for a while. behaviorally, he seems to do so much better on less pharmaceuticals. i'm still making his thca cannabis oil. everyone's sleep has been better lately, too, except for getting up in the middle of the night to tend to him when he is seizing, five or six times every month, or so.

zero degrees this morning, though the sun feels good on my back and in my bones. thirty-nine degrees tomorrow. eating ice cream lately as if it were summer. blood pressure is good. feeling healthy. spring is coming. days are getting longer and the quality of light in late afternoon is promising. unfortunately there is still snow and ice on the ground. smellie is still a little gimpy, though the anti-inflammatory seems to be helping. my friend is in hospice now.

leaning hard for warren. russians are still meddling in our elections despite what the occupant says, and the false narrative he tries to spread. know your source and that it has integrity. don't believe everything you hear. look out for bots and trolls. count your blessings. children in venezuela and syria are starving and are targets of gangs and wars.

went to bed at seven-fifteen one night a week ago. finished there, there by tommy orange. now i'm reading jane eyre. i love the classics—fitzgerald, hemmingway, capote, shelley, steinbeck, nabokov, stowe. should carve out more day time for reading. been writing on my memoir again. wish calvin could read and write and draw.

while in bed next to him after his last seizure, a few times he stopped breathing for several seconds. i nudged him and whispered his name and he resumed. i've often thought it wouldn't be a bad way for him to go, but boy does it scare me when i can't hear his breathing and don't feel his chest rise and fall. i mean, how many seizures can a heart and mind take? i wonder what the hell we would do without this sweetheart of a boy. i wonder, despite all the good people in the world, how certain men in power can be so ruthless, deceitful, selfish and evil. perhaps as kids they were neglected or abused or had disgraceful, racist, greedy parents. and what becomes of their children, if they have any at all?

it has been wonderful having michael around a tiny bit more. he's been on leave from his college teaching, advising and committees this year. he still works his ass off in the studio and in the field taking pictures. more often he comes home a bit early to hang out with us before calvin goes to bed. he's super cute with our boy. all kissy-faced, cuddly and playful. did i mention what an amazing chef he is? we miss him when he's not at home. 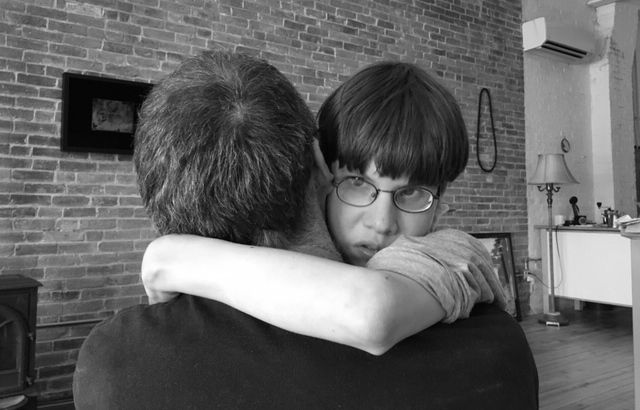 Posted by Christy Shake at 8:40 PM

Email ThisBlogThis!Share to TwitterShare to FacebookShare to Pinterest
Labels: life