To be honest, and thought it's an ugly emotion, there are times when I feel resentful—resentful of my disabled child, his neediness, his fleeting intensity, the way he disrupts my sleep and chaps my nerves. Though I'm mostly grateful, I'm sometimes resentful of my husband's freedom and frequent travel to faraway and exotic places which I long to revisit and explore. I'm resentful of this nation's so-called leader, his reckless policies and spineless lackeys. On days like this I resent the snow and the fact that the district called off school. I resent Maine winters, icy sidewalks, bad drivers, priggish individuals, ignorant fools. My weariness gets the best of me on days like these. No doubt you can tell.

Last night, Calvin went to sleep as soon as his head hit the pillow. Thankfully, Michael and I were able to finish our dinner while watching the first half of the film, Roma, basking in its gorgeousness. But just as we called it a night and crawled into bed, just as I was about to drift off, Calvin sat up and banged his head against the side of his bed and pounded his mattress repeatedly. In the space of half an hour, I laid him down for the one-billionth and one-billion-and-first, second and third time. I was so sleep deprived and vexed I could not contain the rounds of expletives rapid-firing from my mouth. These are the kinds of times when my resentments feel steroidal.

I have little doubt that the politics of the hour exacerbate my feelings of despair, frustration, and resentment. Certain circumstances bring irony into sharp relief, triggering some indignation, like when staunch opponents of Medicare For All must end up relying on fundraisers to cover their medical expenses, or when those with disabled children vote Red, going against their self-interests, or when people make the absurd and dangerous claim that Democrats want to destroy America, or when folks admonish decorated career diplomats who bravely and selflessly defend democracy.

Yes, when I'm exhausted I'm prone to feeling most resentful. I guess my guard is down. I resent the looks I get from strangers who don't understand the first thing about Calvin or what it's like taking care of his kind of child. I resent professionals of all ilks who think they know my son better than I do. I resent parents of typical children who show contempt for Special Education funding. I resent that there are really no local programs for kids like my boy. I resent the fact that some people malign me or play me for a fool. In the big picture, however, none of that really matters much to me. I know who I am, I know my tribulations, I'm okay with how I've learned to roll.

Today my eyes ache while feeling simultaneously swollen and hollow. My son is up to his manic screeching and antics. We're stuck indoors. The news out of Washington keeps getting worse. With little doubt things have not hit bottom considering the sycophantic actions of those emboldening the autocrat in the Oval Office.

Despite resentments, however, there is some welcoming news. Calvin is improving in myriad ways regarding his calmness, understanding, focus, expression, compliance, and overall sleep. He is having fewer seizures—virtually no focal ones—on far less medication. He has begun pooping on the potty after we give him a suppository, which translates into fewer dirty diapers. Though spring is still months away, we are headed in the right direction. Then, there's the excitement and hope of a sea change come November, after getting behind one of the wise, respectful, experienced, decent, Blue presidential candidates who have righteous policy agendas to help the middle class, students, the environment and the most vulnerable in out nation. The image of all these truths dissolves my bitter resentments in an instant, like the snow melting on a salted street in winter. 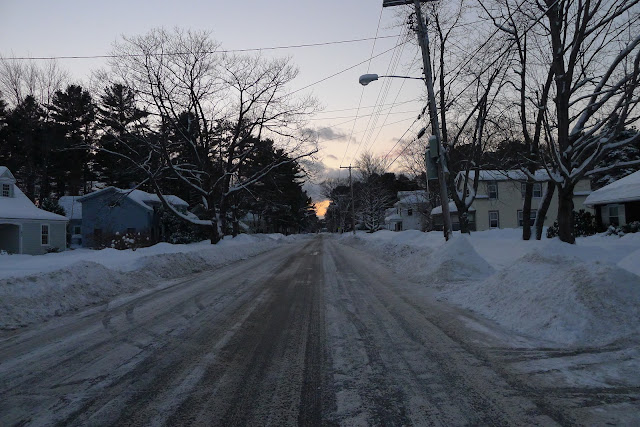 Posted by Christy Shake at 7:00 PM