in the wake of ice storms

Last Friday's ice storm on my only child's sixteenth birthday reminded me of the day he was born. My water had broken at one o'clock in the morning. The doors to our mudroom and car were incased in ice. Michael punched them open, and we made our way along desolate streets to the emergency room of our local hospital. Shortly thereafter, we were transferred by ambulance to Maine Medical Center in Portland. After a lengthy pheresis during which my platelets were extracted to give to Calvin for his suspected brain bleeds, and during an emergency cesarean under general anesthesia, Calvin was born. Neither Michael nor I witnessed his birth because, since I was unconscious, Michael was not allowed in the operating room.

Upon his delivery, Calvin did not need the platelets, nor did he need brain surgery to install a shunt; spinal fluid was not backing up in his brain, so his enlarged lateral ventricles were stable. But he was six weeks premature and weighed less than five pounds. He was flaccid and had awful Apgar scores, had difficulty breathing and regulating his temperature, had dangerously rapid heart rate and respiration, and no suck-swallow reflex. He spent seven weeks in the hospital—half of which he boarded with me in a labor and delivery ward—before we were able to bring him home.

Every year for at least the last decade Calvin has gotten a hand-delivered, handmade birthday card from my friends' son, Felix, who was born in the room next to ours a few days before we were discharged from the hospital. Felix's card, and past ones from his sister, Zoe, who is away at college, tell me that Calvin is thought of and remembered, even when life itself seems to have neglected, sidelined and harmed him in so many ways. The gesture usually moves me to tears.

This morning, Calvin suffered one of thousands of seizures he's had since he was two years old. When he has a grand mal, I sleep next to him for at least an hour just to make sure he keeps breathing. People can die in the wake of seizures, and so I remain vigilant as possible for my son. As I rested my hand on his waist, I felt keenly aware of every moment from the past sixteen years—the pain, the sorrow, the grief, loss, despair, fear, doubt, struggle, sleep deprivation, fatigue. So, too, I felt the moments—however fleeting—of triumph, joy, hope, love, tenderness, understanding and even levity. Then I drifted off to sleep.

In the days after an ice storm, streets can be treacherously slick. Craggy slush impedes sidewalk progress. These icy-white tempests can lay waste the landscape, breaking branches and taking down power lines. But in their wake they reveal crystals which glow and glimmer like halos when the sun filters through the treetops. And sometimes, despite bad odds and weather, precious babies like Calvin make their way into the world and amaze us. 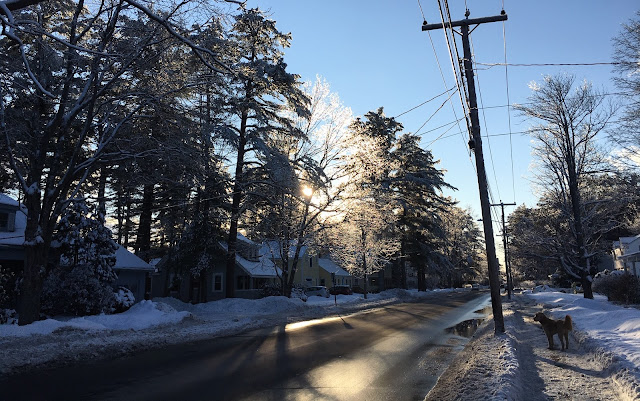 Posted by Christy Shake at 4:11 PM