Occasionally, after hearing about the struggles, angst and pains of raising our disabled son, a stranger, friend or in-law will tell me I'm a saint. While I appreciate the sentiment, the only saint in our household is Calvin. Smellie comes in a close second, that is if dogs, especially those who pop chippies and squirrels, qualify for sainthood.

Last week, when walking back from Woody's house, Calvin was staggering and stumbling, limp as a ribbon. I had to make a concerted effort not to trip him or let him topple me. No method I attempted improved our trajectory. I held his hand, gripped his wrist and upper arm leading him forward. I slung my arm around his shoulder, his waist, clasped my hand at the back of his neck trying my best to propel him. I walked behind him prodding him along, every few steps my hands pushing and patting his shoulder blades. My efforts were nearly futile. Every time I stopped nudging or tugging him, he just stood there, even though our house was in view just a few yards away. Finally, I got so frustrated that I yanked him along by his wrist at a pace quick enough to straighten out his serpentines and prevent him from dropping down. All the while I cursed him and our regrettable situation. A devoutly Christian friend once told me that I'll be going to Hell. If I thought Hell exists, which I don't, I'd have little doubt I'd be going there, but not for the reason she asserted (which is that I don't believe Jesus is my lord and savior.)

Despite knowing all too well that Calvin can't help any of it—his poor balance, his awkward gait, his weakness and lethargy, his restlessness, his mania, his drooling, his sun-staring, his epileptic fits—sometimes he still drives me batty. The stress from chronic sleep deprivation, monotony, cabin fever, the weight of anxiety over seizures, my son's vexing behaviors—all exacerbated by the coronavirus—can lead me to some ungodly behavior.

But just when I'm about to commit the worst blasphemy because Calvin has bitten the radiator or the bookcase or the carpet or the faucet, or dribbled prune juice all over the floor, or is stubborn as hell refusing to go where I want or need him to go, my boy turns to me, pulls me in and wraps his arms around my neck. Sometimes he gives me a kiss on the nose. For a second, I glimpse the sweetest, most angelic smile on earth. As he graces me with his singular version of saintliness, all my anger and frustration dissolve into the secular heavens. 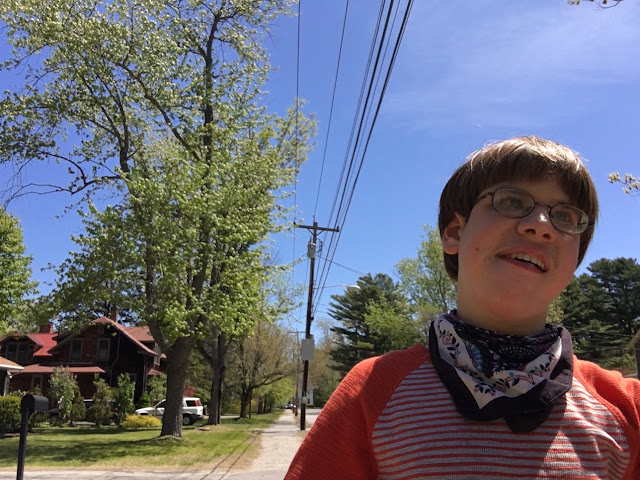