In my dreams as a kid I used to smell death. The scent was sickeningly sweet. Typically, no one in my dream had died. It was just a sense that came over me, a notion more so than an aroma, that death was somewhere nearby. In any case, it made me queasy.

Last night at six-thirty, Calvin had a grand mal. It was only day three since his last one, and an unusual time of night for him to seize. No interventions were necessary but to lay our hands on him and kiss his neck. In its wake, he was more fitful than usual, couldn't lay down or sit still. Eventually, though, he settled and we pulled the covers over him as he fell asleep.

Sudden Unexplained Death in Epilepsy (SUDEP) is thought to be more common in the twenty minutes, or so, after a grand mal. So, I remained with Calvin while Michael brought up our dinner which we were just about to eat when we heard Calvin seize. Michael pulled a chair into the room and set a lit candle on Calvin's dresser among his various medicines. I sat on Calvin's changing table with my plate in my lap. We ate our dinner bedside, a candlelight vigil, lamenting Calvin's struggles and stresses, wondering if he'd one day succumb to SUDEP, then deciding finally he's too much of a fighter to submit.

After sleeping peacefully for hours, this morning at four Calvin woke to a focal seizure. The fit was long. He wasn't breathing during part of it. I syringed his morning THCA cannabis oil into the pocket of his cheek and under his tongue. Finally, he came out of the seizure, then fell right back to sleep. As I had feared, an hour later he suffered a second grand mal.

As I laid in bed next to him my mind wandered. I wondered how many seizures a brain can handle. I listened to the songbirds outside his window feverishly making themselves heard. I remembered how the only word Calvin ever said—just once—was Mama. That was before the seizures and drugs started to do their hurtful work on his development. After half an hour I returned to my own bed. I tried to get comfortable, focusing on relaxing my jaw and face muscles. Eyes closed, a hint of that death dream-smell came over me. I held Michael's hand. I thought of my friend Woody, of the little girl Charlotte who had epilepsy and died from probable complications of coronavirus. I imagined the candlelight vigil of the night before. I never did make it back to sleep. 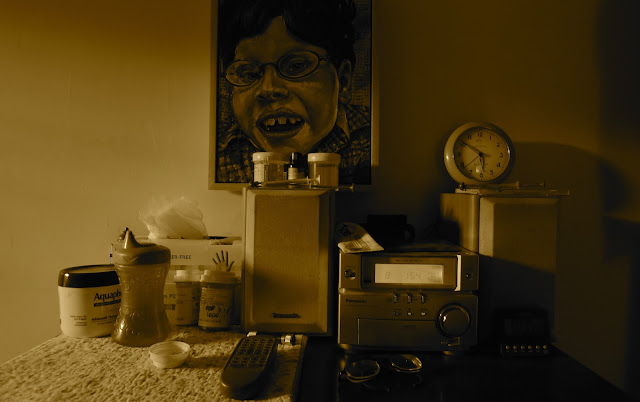