I dream at night of San Francisco, but it's not the town that was my home. I dream at night of my husband, but he's not the man I know. I dream of movie stars and strangers falling in love with me. I dream of ex-sweethearts, but they're not like I remember. I dream of Calvin speaking, but also of him seizing. I dream of fleeing an America I don't recognize—a quarter million dead and thousands of others dying, Confederate flags, internet trolls, deceitful leaders, social unrest, jobless, hungry, homeless, sick Americans.

But my eyes are wide open; it's not a dream at all.

The other night, after Calvin's worst day in a long time, I laid awake thinking about a movie Michael and I had just seen called 20th Century Women. Near the end of the film was a clip from President Carter's 1979 Crisis of Confidence speech. So moved, the next day I went online to watch and then read the entire speech. As I did, I felt as if he were speaking about the coronavirus pandemic, its trivialization by some, and its reckless handling by the current administration. It felt as if he were addressing the current political climate—the pugilistic presidential election, the recent and regrettable Supreme Court fight, the deadlock in the Senate, the spread of election disinformation, the disenfranchisement of Americans, and the polarization and divisiveness in our nation. Here are some excerpts which struck me:

I want to talk to you right now about a fundamental threat to American democracy.

The threat is nearly invisible in ordinary ways.

It is a crisis that strikes at the very heart and soul and spirit of our national will. We can see this crisis in the growing doubt about the meaning of our own lives and in the loss of a unity of purpose for our nation.

Our people are losing that faith, not only in government itself but in the ability as citizens to serve as the ultimate rulers and shapers of our democracy.

President Carter went on to say:

The people are looking for honest answers, not easy answers; clear leadership, not false claims and evasiveness and politics as usual.

You see a Congress twisted and pulled in every direction by hundreds of well-financed and powerful special interests.

You see every extreme position defended to the last vote, almost to the last breath by one unyielding group or another. You often see a balanced and a fair approach that demands sacrifice—a little sacrifice from everyone—abandoned like an orphan without support and without friends.

We are at a turning point in our history. There are two paths to choose. One is a path I’ve warned about tonight, the path that leads to fragmentation and self-interest. Down that road lies a mistaken idea of freedom—the right to grasp for ourselves some advantage over others. That path would be one of constant conflict between narrow interests ending in chaos and immobility. It is a certain route to failure.

All the traditions of our past, all the lessons of our heritage, all the promises of our future point to another path—the path of common purpose and the restoration of American values. That path leads to true freedom for our nation and ourselves.

Carter's words resonated with me deeply, and rereading them I was nearly brought to tears. I imagined the two paths he mentioned—two Americas, really—one of them rising high toward healing, reform, unity, inclusiveness, diversity, compassion, decency, and justice, the other descending deeper into cynicism, intimidation, chaos, bigotry, selfishness, poverty, illness and lonely, unnecessary deaths from a runaway virus.
I hope in this election we, as a nation, abandon our worst impulses and fears and choose the high road—the path to an America worth dreaming of and fighting for—one glowing with hope and light and integrity, an America not just for some of us, but for us all.
Vote! 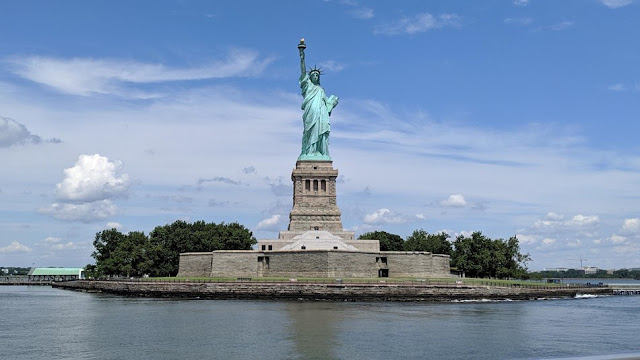 Posted by Christy Shake at 2:11 PM