This morning, I slid into my favorite jeans, chambray linen shift, denim jacket and studded, black ankle boots. I even put on a necklace, because today I celebrated a special occasion: voting! After loading Calvin and Smellie into the car, I drove out to Simpson's Point. Beneath a sky the same gray as the restless sea, I carefully filled out my absentee ballot in my lap. After making certain that I'd made no mistakes, I stuffed and sealed the envelope, signed the back, then headed to our town hall where I popped it into the ballot box.

Today, I didn't just vote for my own interests.

I voted for my son Calvin and others like him who have preexisting conditions, and others unlike him whose healthcare is in jeopardy as the Affordable Care Act is being actively fought before the Supreme Court by an administration that has no plan to replace it.

I voted for essential workers who risk their lives every day during this pandemic—still, without access to proper PPE or coronavirus testing—to harvest our food, ring up and bag our groceries, care for our elderly and infirm, run our public transportation, put out fires, collect our refuse, teach our children. I voted for those in the service industry who cater to our every whim even when maskless others put them and their families in danger. We need an administration that takes this virus and its hazards seriously and lays out a plan for mitigating it.

I voted for supporting working women who continue to do the lion's share of housework and childcare while their careers suffer, especially amid a rampant pandemic. We need universal childcare and paid family leave.

I voted with scores of my African American friends, neighbors and acquaintances in mind, because their basic civil rights continue to be violated by harmful policies and practices in a nation that has not yet lived up to its original promise of equality for all. We need an administration that acknowledges our nation's sordid history and, in no uncertain terms, condemns police violence and White Supremacy.

I voted for the right of my female friends, their mothers, sisters and daughters to control their own bodies.

I voted for my gay and lesbian friends whose right to marry those they love is in the hands of a Supreme Court whose conservative justices have shown to value dogmatic religious freedoms over fundamental personal ones.

I voted for the Dreamers who were brought to this country as children and who are American in every way but on paper. They deserve a path to citizenship.

I voted for disabled people who—still marginalized—may not be able to make it to the polls and who might have great difficulty casting their votes by mail.

I voted for those whose votes are actively being suppressed, whose polling locations have closed, who've been wiped from the records for simply having not voted in past elections, who don't have easy access to the polls, their town hall or to their local drop box.

I voted for those who have been separated from their family members because of this administration's harsh and discriminatory immigration laws and practices.

I voted for former felons—no doubt many who are innocent of the crimes for which they were convicted—who, despite having paid their debt to society by doing time behind bars, continue to be disenfranchised by policies meant to keep them in the margins of society and to stifle their voices.

Vote early if you can. Vote in person if you are able. Vote absentee if you must, and drop it at your town hall if you can. Click here to find out how to vote in your state. 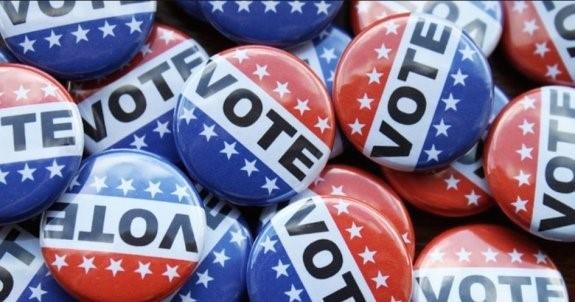 Posted by Christy Shake at 5:08 PM

Email ThisBlogThis!Share to TwitterShare to FacebookShare to Pinterest
Labels: vote