her hair fell in wet, ropy waves over her shoulders. having just emerged from the water, she looked like a mermaid in the filtered gleam of a waxing moon. earlier, before sunset, a great blue heron had flown over. she said it was a good omen. so too, i thought, was the double rainbow which had arched in the northeastern sky from amid a bank of pines.

we picnicked atop a slope overlooking an inlet. the smell of cut grass and cows drifted across our table. we splayed out a feast between us—baguette, homemade pesto, purple heirloom tomatoes, triple cream and goat cheeses, green olives, dry salami, salt. we drank red wine from clear plastic cups. exploring the nuance of everything, we talked about the pandemic, the variants and vaccines. we spoke of our children and about the saintliness of them. we laughed and chatted for hours, catching up on eighteen months of each other's news.

as the sun began to sink into a cloudy horizon, it glinted gold and silver. well sated, we left our provisions behind and, drinks in hand, began strolling around the nearby campground. we passed a man propped against his trailer singing and strumming his guitar. kids were riding bikes, playing tag and squealing. though dusk began to fall just as our path veered into the trees, we decided to keep going. as she stepped into the shady wood, the orange sun set her aflame. she was glowing.

the path led us down to a tiny lagoon where the pink clouds reflected in its pool. we continued on, passing more tents, trailers, cottages, and one yurt skirting the inlet. by the time we hit the dirt road near the farm, the sky had darkened and the rising moon shown through the clouds. we had walked nearly two miles. back at the picnic table, we gathered our things then tiptoed down the dewy hillside to put them in the car. our last stop was the wooden bridge spanning a narrow tidal inlet. she told me of her plan to jump from the little platform built on the back of the guard rail. she'd done it countless times before. years ago, i'd seen teens launch themselves from it on hot summer days. it looked to be about ten feet above the tide. in the ensuing darkness, the sun's warmth still radiating from the wooden planks and railings, she began undressing until she was just in her skivvies. in a blink, she leapt and disappeared into a froth.

upon surfacing, she exclaimed how magnificent the water felt, adding that it was not too cold at all. i trusted her. she wanted me to jump. only problem was that i was going cowboy (aka, commando, for you east-coast types) and two folks were approaching. but it was sufficiently dark, and she offered to shield me with her towel. i climbed over the railing, peeled off my shoes and socks, t-shirt and jeans until all i had on was my chambray bra, then i stepped to the edge. she assured me the water was deep enough to leap. i had every reason in the world to believe her, and i had leapt off of cliffs and bridges and diving platforms as high as thirty feet before.

flying through the air, crashing into the water, having it envelop me like a liquid glove, felt exhilarating. it had been years since i'd been in it. salt filled my mouth and stung my eyes, reminding me of summer vacations to pacific northwest beaches as a kid, and of body surfing at beaches in san francisco, hawaii, kenya, tanzania, and swimming in the waters off of turkey and brazil. the tide was strong, but not as strong as i, so it was easy making leeway to the rocky bank, which i then scrambled up, dripping with sea water.

back on the bridge, i toweled off as both of us smiled and giggled about our adventure. we walked barefoot to the car laughing so hard we could have wet our pants—that is, if we had any on!

on the drive home, windows open to the sultry air, we splashed through puddles from an earlier rainstorm which had completely missed us. the white eyes of a baby raccoon peered into our headlights from the shoulder, and a tiny frog leaped across the road. i was smiling inside and out. it had been one of the nicest evenings in recent memory, if not my entire life—a magical one, really. for the most part, i'd forgotten about calvin and his (our) miseries. forgotten about imposed limitations. forgotten about stresses and pandemics. and as we hugged goodbye, the afterglow of red wine and adrenaline still pulsing in our veins, we promised to do it again. 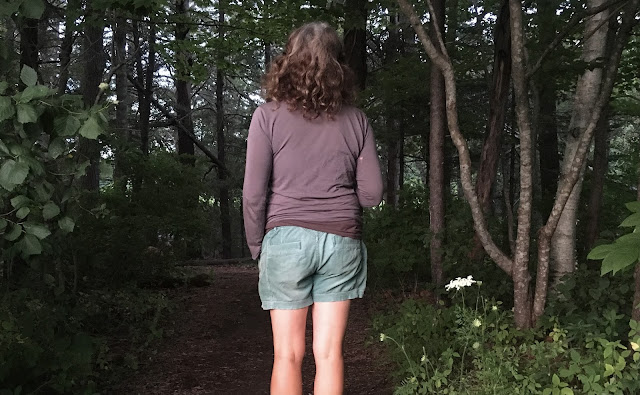