This morning, I put my coulda-woulda-shoulda-high-school-senior, Calvin, (he's actually a junior because he repeated kindergarten) on the bus and got to work. I walked Smellie, did a load of laundry, folded some of it on the green couch for all passersby to see, transplanted a shrub, watered the entire thirsty garden, prettied up the withering day lilies, put clean dishes away, did my first legitimate grocery shopping (wearing my N95 mask) in a year and a half, read a bit of news, and wrote. A little more than halfway through the day, Calvin's teacher Paul, whom I adore, texted me to tell me that Calvin was doing well, and attached a photo of him walking down the stairs. No doubt The Kid is on the move.

On Facebook, oodles of friends sent me loving sentiments in response to expressing my angst about sending Calvin to school for such a long day after having spent most of his time chilling with me since the damn pandemic began. One person wrote, "he's gonna be FINE." I wish I could be so confident, but he had seven grand mals this month, and our boy has a habit of not being fine much of the time.

Because of Calvin's sheer number of grand mals, which have been ticking up for several years while his focal seizures have almost dissolved, I've been pondering adding a second pharmaceutical to his regimen. We've cut back pretty far on his Keppra to see if that makes a difference, though it's still too soon to tell. But when I read about all of the side effects of new and old drugs—some of them behavioral, others lethal—I get cold feet.

Epilepsy is a goddamn beast. There's no cure, and the drug side effects can debilitating and impossible to tolerate. Calvin's wordlessness complicates everything since we can never know what he is thinking or feeling. With at least one grand mal every week, a day or two of recovery, plus the drug side effects, I can't imagine he ever feels really good.

When it came time for the bus to show up, I sat in the dappled shade on the front porch with Smellie, my pink Chuck Taylors brightening me up. The bus was a bit late, allowing me to do what is exceedingly rare for me, which is NOTHING. When it finally arrived, seeing Calvin stand at the top of the stairs with his aide, Fern, keeping him safe, I was amazed at how much Calvin has grown since the spring.

The Kid gave me a hug, clawing my neck the way only Clawvin can do. While we stood in the driveway, our arms wrapped around each other, I tried hard not to imagine that—if things hadn't gone so wrong—he might be joining some of the seniors on the playing field, in the classroom, in the halls, and well on his way to college. 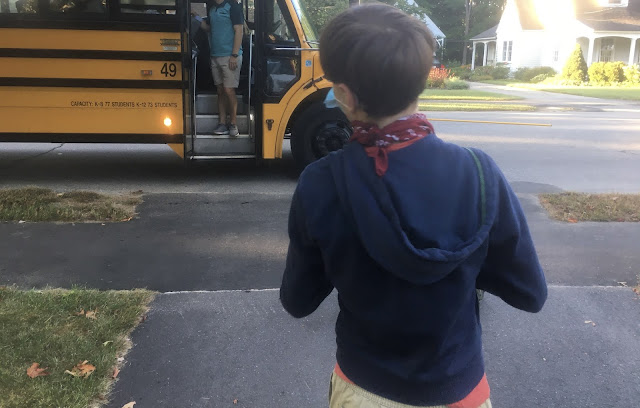 Posted by Christy Shake at 8:13 PM