for the fourth consecutive morning, i wake well before the birds begin to sing. in these parts, that's pretty damn early. today, sleep and dreams shatter at the sound of my son's seizure screech. his second grand mal in less than three days. i had hoped we would avoid a cluster of them. but his fits are effing stubborn.

after i give him some homemade thca cannabis oil, i crawl into bed next to him. spoon him like i've done for years—my little birdie, who flaps his wings and opens his mouth for bits of food just like our feathered friends. he falls asleep in my arms for just a spell. before drifting off, i hear the clear, sharp call of a cardinal. then a chirping robin. it is beckoning its little ones. i've seen a pair of robins and their offspring nesting in the tree near calvin's window. been spying them a couple of weeks now. at first, the hatchlings were so tiny, nary a quill to show. now they're nearly big as their feeders, but with shorter tails. yesterday, i watched as, one by one, they began to leave the nest they've all outgrown.

a quarter hour after calvin's grand mal, he arouses. presses his eyes with the heels of his palms. i turn him over to give him his morning pills. chase each one with drops of water from the sippy cup i keep on his bureau. give him a couple of pain killers in case his head hurts. the best i can do is guesswork; since he can't tell me, i can never really know. he's agitated. restless. not himself. wondering about that last one, i ask myself—has he ever been so?

unable to sate him, i climb out to fill more syringes with cannabis oil. i think i need to be more liberal with it. it seems to help him. i lift and latch the panel on his bed. secure the safety netting so he won't fall out and hurt himself again. before heading downstairs, i raise the shade and peak out the window. in dawn's dimness, i see the robin's nest is empty. its hollowed center makes me feel forlorn. it has been a wonder and delight to watch the chicks change and grow. turning, i check on my own little birdie. he's all balled up in bed, his head resting on a goose down pillow. he isn't yet a fledgling. i wonder if he'll one day leave this home. wonder if we'll ever become empty nesters. i really don't know. 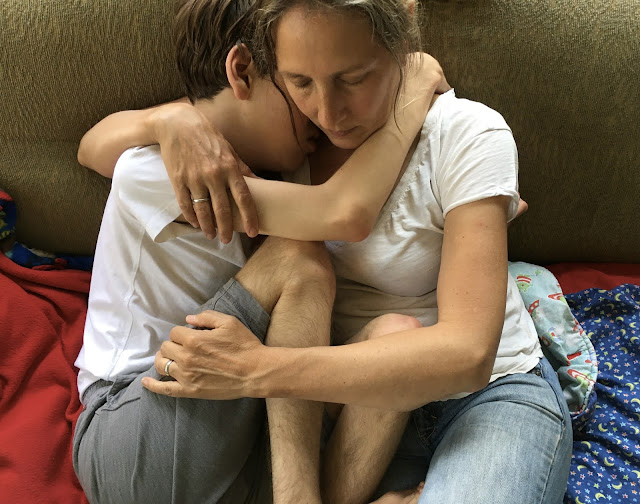 Posted by Christy Shake at 9:03 AM