too soon. only five days since he suffered the last fit. still, i saw it coming. i gave him extra cannabis oil hoping to prevent it. maybe i waited too long; it failed to do the trick.

i kissed my restless kid. laid him back down in his bed. a rare and sadly suspicious smile crept across his face. minutes later, we heard his telltale shriek. i thought we had dodged it. i was wrong. he seized and choked. something inside his mouth bled. afterward, he had trouble catching his breath. it's always unsettling. something we dread. never gets any better.

i quickly brushed my teeth and undressed. crawled into his bed. with my palm against his chest, his heart felt as if it would burst right through his ribs. it remained pumping wildly for quite some time. caused me to fret. made me think we should start him on a new med.

finally, my little calvin drifted off to sleep. dim light seeped in from the next room. i peered over his shoulder to a portrait of him propped against the wall above his dresser. it was made when he was five or six. often, when i lay in bed with calvin in the wake of his morning seizures, i see it in the shadows, its cool blues, pinks and reds. it was done from a photo. gifted to us by a painter friend. it's masterful. full of life and color, vivaciousness. in it, my boy's eyes are bright. his smile is big and broad. his gaze, unusually fixed. he's looking right at me. it's clear he sees me. these are rare and amazing gazes. on the days when i don't see my son smile—which is most, lately—at least i can always rest my eyes on it.

over the years, calvin has lost his sense of cool. of calm. of happiness. we see glimpses, like when we tickle or kiss him. but those moments are far between and fleeting. i wonder what the drugs and seizures did to him and are doing. wonder if he is in constant discomfort or pain. wonder how his hormones factor into the equation. wonder how we can recapture his happiness again. 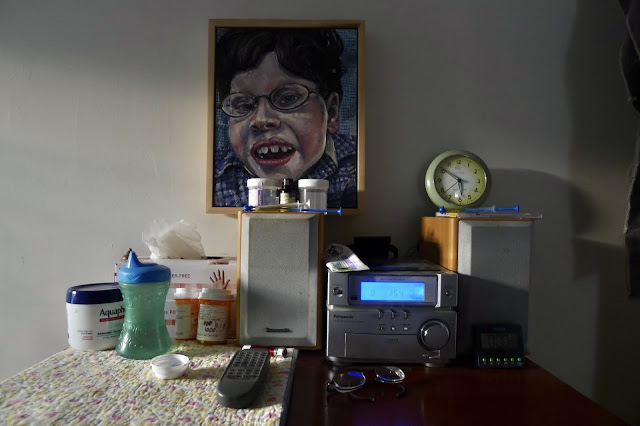 Posted by Christy Shake at 5:19 PM