If my nonverbal, incontinent, legally blind, unconditionally-loving son Calvin has (unwittingly) taught me anything, it is to be grateful. That might seem counterintuitive considering our sorry situation, but I've come to understand that mindfulness and gratitude are two practices that help get me through the bruising parenting of a cognitively and physically disabled child who has a chronic condition as relentless and unforgiving as epilepsy. Gratitude and mindfulness help keep me grounded while at the same time distract me from getting stuck on the troubling aspects of life concerning my son.

Last Saturday night was a rough one for us. After a day of snotty-nosed sneezing, Calvin developed a cough and a fever of 102.6 degrees. Several hours later, I was amazed that the stubborn fever hadn't managed to break his twenty-seven-day seizure-free streak. However, despite alternate doses of acetaminophen and ibuprofen, at 1:30 in the morning a grand mal finally broke through, and a second one regrettably followed a few hours later. The kid is still sick.

Nevertheless, on Sunday, as on most days, I found things to be grateful for: Calvin didn't have a third seizure; he felt well enough to be interested in a car ride; though he didn't eat, he took in fluids; I still managed to get outside by myself to run a few miles. Practicing gratitude, however, doesn't mean I don't also lament Calvin's and our impossibly difficult and relentless situation.

Throughout the weekend, I thought about a social media post I'd seen in which its author expressed her belief in a heaven for the followers of Jesus. The specificity of her remark made me bristle a bit, understanding well that many if not most Christians are convinced that nonbelievers—no matter how virtuous—will be tormented in Hell for eternity; I've had friends and acquaintances tell me that's where I'm headed simply because I'm not Christian. Mostly, I laugh off what I regard as an absurd, fantastical, primitive invention. I went on to consider Calvin's innocent obliviousness to Jesus. I thought, too, about my many salt-of-the-earth Atheist, Jewish and Muslim friends who, though they know who Jesus was, do not claim him as their lord and savior. If there is a god, is "He" so conceited and merciless as to banish decent people to eternal damnation for their so-called indiscretion? Are we/they not God's beloved children, too? Shouldn't virtue be valued over appeasement?

I went on to recall an interview I did with a student of journalism who produced an audio profile of me during the height of the pandemic. She made a gorgeous, seven-minute piece about my life with Calvin. Her depiction is rich, though doesn't include my recorded musings on religion, Christianity, specifically. I surprised even myself when I told her that many aspects of Christianity offend me. I had never thought of it in those stark of terms before, but as I described sweet Calvin's miseries and struggles—his malformed brain, inability to adequately express his wants and needs, his helplessness and vulnerability, his seizures, the heinous transient and permanent side effects of epilepsy drugs and their withdrawal—my position crystallized. I lamented to her the "everything happens for a reason" and "God doesn't give you more than you can handle" platitudes that come my way all too often from well-meaning Christians when they learn about Calvin. To the former, I usually respond by saying I don't believe it for a second; to the latter, I counter by asking why, then, do people kill themselves?

Though raised Catholic, and despite the fact I'm fond of the presumed teachings of Jesus, I lost my religion ages ago, having first begun to doubt it with the tragic swimming pool accident of a best friend's two-year-old sister when I was fourteen. As the years have passed, I've become more awake to Christianity's patriarchy, sanctimony, power-lust, enrichment, racist and bigoted history, and the hypocrisy of some of its most ardent leaders and disciples, which doesn't negate the fact that, like all people, most Christians are good.

But, there is something else that troubles me: religion's depiction of the creator (assuming there is one) of our mind-blowingly vast and expanding universe as anthropomorphized, obstinate, immutable, callous, conceited, judgemental and unforgiving—a being, I'd argue, that seems made in man's image rather than the other way around. What exactly would be the motive for an allegedly omnipotent, merciful god to let "His" children suffer, to test them so harshly, setting up some of them—like Calvin and others who through no fault of their own are isolated and ignorant of Jesus—for certain failure? And if we puny humans are capable of forgiving each other's mistakes, shortcomings and most heinous offenses, why isn't God? What is the point of a fealty experiment, anyway? Shouldn't virtue be enough?

Knowing with the utmost conviction the answers to my own questions, I return to musing on gratitude—for the green canopy of trees, for a healthy body able to run free for miles by myself, for an adorable, affectionate child, a husband, friends and family who love me, for kind strangers and shearling slippers and smoked-chicken enchiladas and black-eyed susans and Nan's dahlias and lemon bars and Smellie dogs and cozy homes and blue ocean vistas and moody skies and screen porches and chilly mornings and warm breezes in the afternoon. Finally, I land again on imagining that wherever, whatever or whomever these gifts come from must unquestionably be free of judgement, an expansive and evolving universal beauty. And if perhaps it's a celestial energy or being, I imagine it to be no less than my pure son Calvin—a force of genuine and infinite acceptance and unconditional love. 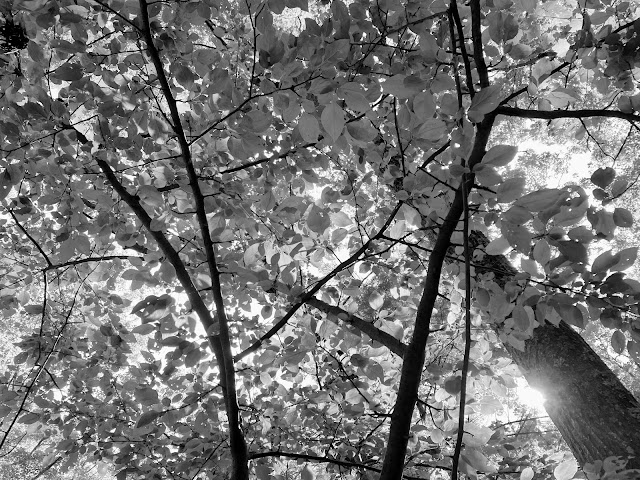 Posted by Christy Shake at 4:31 PM