Today, the day of Calvin's birthday party—our 5th annual CURE epilepsy benefit—we woke up to at least two feet of snow. Our doors were blocked by drifts and Rudy practically drown in one that was well up past his nose. The storm is still blowing but we are committed to partying tonight, hoping that the weatherman is right and the storm will, for the most part, blow over by early evening.

I called Nels the donut man who had spent the wee hours of the morning crafting custard and jelly-filled donut holes for us to pick up as soon as Michael digs us out. My friend Eloise went into her closed restaurant yesterday to fry up two huge bags of tortilla chips, smash up a gallon's worth of avocados for guacamole and mix up a vat of salsa. Several other restaurateurs and bakers are going out of their way to make pizzas and chicken salads and quiches and terrines and spanakopitas and pates and who knows what else for this evening's event. We've got a smoked salmon fillet, shrimp platters, fruit platters, veggie platters and two delicious cakes plus gobs of beer and wine, live music and a funky play list. Only three guests, out of about 120, have said that they can''t make it. I'm optimistic. It runs in my blood.

We can't postpone and we don't want to cancel. So, amidst one of the worst storms in a century, one that the weather channels have so sensationally tagged as "crippling," we'll be getting down with our bad selves in our suits, sports jackets, cocktail dresses, other fun getups and snow boots. It'll be a Mainer's quintessential party and one to remember. And, like Calvin has done for his entire life, we will persevere, we will struggle toward the goal, we will fight the storm, brave the gale and have one hell of a good time tonight.

Join us in spirit by donating to CURE epilepsy: http://www.calvinscure.com 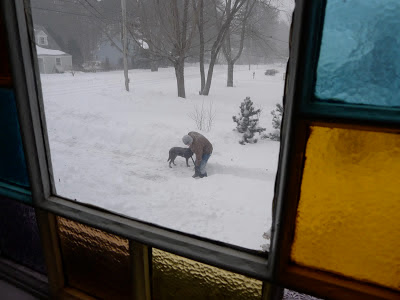