There came a point after Calvin's epilepsy diagnosis, nearly nine years ago, that I had to devise a way to remember if I'd given him his medicines and, if so, at what time. He was taking so many that I feared missing a dose, double dosing or forgetting what time I'd given him his meds, because in case he spit them up we'd be faced with repeating a dose if they hadn't had time to completely absorb.

My solution, neither high-tech nor pretty, works for me. For years Michael has been saving these sheets to photograph, most of them marked up, coffee stained and crumpled. The one you see below is from October/November 2008 and represents seventeen administrations of eight different drugs and supplements. The highest number of Calvin's daily administrations was twenty-three, not including pain medication, suppositories or emergency rectal Valium.

The other day we finished weaning Calvin off of Miralax—polyethylene glycol—a grainy powder which acts as a stool softener meant to ease constipation. For years doctors told us it was completely benign and, for a time, Calvin was taking more than an adult dose—as much as twenty grams mixed in water—every single day. Recent studies have raised the question as to whether the drug, which is not dissimilar to an ingredient found in antifreeze—ethylene glycol—can be absorbed in children's bloodstreams causing undesirable side effects, including behavioral problems. Now, in order to manage Calvin's chronic constipation, besides continuing to give him lots of fruits and vegetables and encouraging him to drink as much as possible, we give him suppositories nearly every day just to keep things moving.

These days we are down to giving Calvin only three pharmaceutical medications: one synthetic thyroid pill and two anticonvulsants. One of them, a benzodiazepine called clobazam, is on a slow wean. He gets one multivitamin gummy bear and a magnesium citrate supplement each day. In addition, I give him a homemade THCA cannabis oil plus a high CBD cannabis oil, both of which I think are helping to stem his seizures, improve his sleep and his behavior. The THCA oil has seemed to have eliminated his daytime grand mal seizures while allowing us to reduce his benzodiazepine by 70% since last April, in turn improving his balance, focus, coordination and has allowed him to have a calmer body.

It'd be nice to think that, some day, we could scrap these charts, dump the drugs and have a happy, healthy, seizure-free kid. That, however, would require a cure, which is why I do what I do.


This month, in honor of Calvin and 65 million others, help CURE epilepsy at www.calvinscure.com 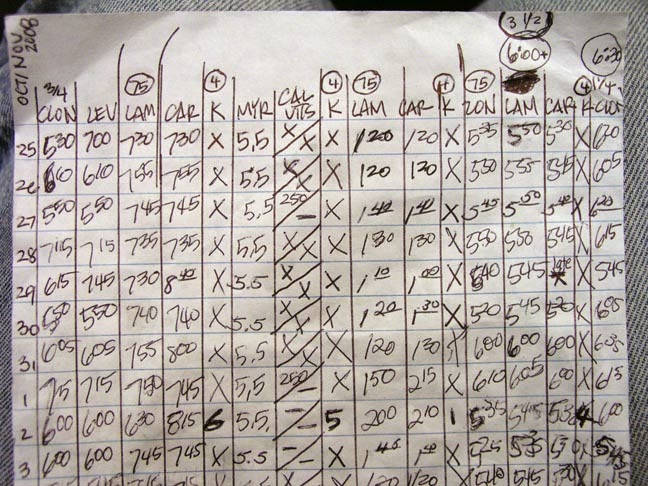 Posted by Christy Shake at 4:14 PM