Yesterday, I visited Mr. Sullivan's fifth grade class at Calvin's school. Each year, a handful of teachers take me up on my offer to come and speak with their students, grades two to five, about Calvin and epilepsy. To be honest, and though I know the teachers are uber-busy, I've been dispirited by the lack of interest, though quickly buoyed when I visit the few who take me in.

Upon entering, the kids gathered around my feet at the front of the room. By a show of hands it looked as if all of them know who Calvin is, even in a school of six-hundred kids. I started by telling them that he was born six weeks early missing part of his brain—some of its white matter—its super highway, I called it. I told them that it takes Calvin a really long time to learn things, which is partly why, at eleven, he is only now beginning to walk completely by himself, the other hindrance being the drugs he takes for epilepsy. I talked about those and mentioned the cannabis and went on about everything in between.

Then, I opened it up for questions, inviting them to ask me anything about Calvin and about epilepsy. Their questions were good. Here are just a few:

Is he allergic to any foods? What activities does he like to do? How long do his seizures last? How many does he have? Even though he can’t talk does he like to make sounds? What kind of music does he like? Can he do things with his bones?

He’s not allergic to any foods though he is on a gluten-dairy free diet. He loves to walk and trike and eat and hug and laugh and get tickled and spin in his johnny-jump-up. He has about three or four seizures a month which usually last several minutes, though once he had one that lasted nearly an hour. He loves to make sounds and said, MAMA, once, before the seizures and the drugs. He loves upbeat music. His bones seem strong but he lacks good coordination, partly because of the drugs.

I mentioned that not all people with epilepsy are like Calvin, that in most cases you’d never know it unless they told you or you saw them have a seizure. I tried my best to define words like prevalence and stigma and debilitation and addiction and side effect.

When I told them that Calvin’s only sign is for the word hug, a sweet girl to my left squirmed with delight, twisted her arms into a pretzel and said, "That's so cute!"

Mr. Sullivan noted how Calvin's eyes appear much brighter in his baby pictures than they do now and he wondered if it was because of the epilepsy. I surmised that it's likely stupor caused by the drugs, then added that Michael reminds me often that photographs don't always reveal the truth.

I instructed the children on what to do if they see someone having a seizure: protect their head, clear away any potentially harmful objects, put them on their side in case they vomit and to never, ever, put anything into their mouth. I told them to point to a specific person and say, “You! Call 911!” because, if left up to bystanders, the call might never be made.

“But that might make that person feel uncomfortable,” one boy remarked.

I went on to explain that, in life, it isn’t bad for us to feel uncomfortable when we are faced with supporting a good cause or standing against something that is wrong—like defending kids who are being bullied—and that stepping out of our comfort zone often helps us grow.

As I said this, looking into the students’ eyes, I imagined other examples needing compassionate support. I thought about gay people facing sanctioned discrimination led by a bigoted Christian Right. I thought of black people oppressed by this country’s racial caste system, of sons and brothers, husbands and fathers being stopped and frisked, shot unarmed, imprisoned by legions, discriminated against in every aspect of life. I thought about the people with autism and Down syndrome who’ve been assaulted by security guards sometimes leading to their demise. I thought about women who are cat-called, misjudged, beat up, underestimated, patronized, ill-treated and systematically over-looked, underpaid and over-charged, their bodies regulated by conservative congressional men. I thought about the immigrant who is misunderstood and maligned and the fast food worker who is overworked and grossly underpaid and the homeless gents who are displaced, neglected, doused, beaten, burned and sometimes shot.

I ended by telling the students what I always do, which is that Calvin is the best person I know because of his his purity, tenacity and boundless reservoir of unconditional love. And as I left the class I thought, if just one of Mr. Sullivan's kids grows up to be a champion for others less fortunate than themselves, the world will be a better place. 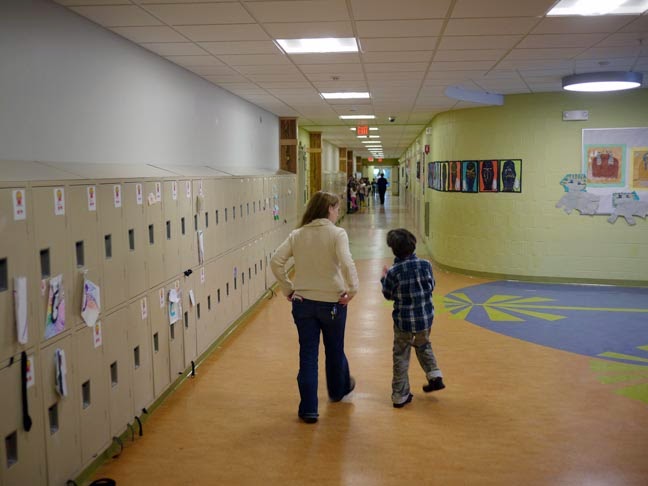