Thanks to cannabis—we think—yesterday marked 365 days since Calvin last experienced a wakeful, tonic-clonic seizure. In other words, it has been an entire year, while giving him my homemade THCA cannabis oil several times daily, since Calvin has gone into a grand mal seizure while conscious. In that same period of time he has only had one daytime grand mal seizure, which was while he was napping. All other seizures, with the exception of spates of partial seizures likely related to his wicked benzodiazepine wean, now only occur at night.

Thanks to cannabis—we're fairly certain—over the past sixteen months we have managed to reduce Calvin's benzodiazepine, clobazam, by over 80% without a marked or sustained increase in tonic-clonic seizures. Because of the loathsome side effects of benzo withdrawal, it will take us another six to twelve months to safely wean Calvin off of the last six milligrams of the addictive drug. Hopefully we can do it gradually enough to avoid killing him or irreparably harming his brain and body.

Today, day 366, I am beginning to make my first batch of CBD cannabis oil with bud from our wonderful and reliable local dispensary. I hope the result is an oil similar to one that Calvin has been getting since November, though it is hard to say if it is as effective as the THCA oil seems to be. In any case, it can't be as bad as the clobazam and might even be acting as a buffer against the benzo blues.

What this means is that my days are mostly void of the deep anxiety I used to feel, particularly around bath time, which was when Calvin usually suffered grand mal seizures on average every five to fifteen days. With any luck we'll find a way, through our pioneering of cannabis, to ease our boy out of the rest of his seizures which he still has every four to eighteen nights. 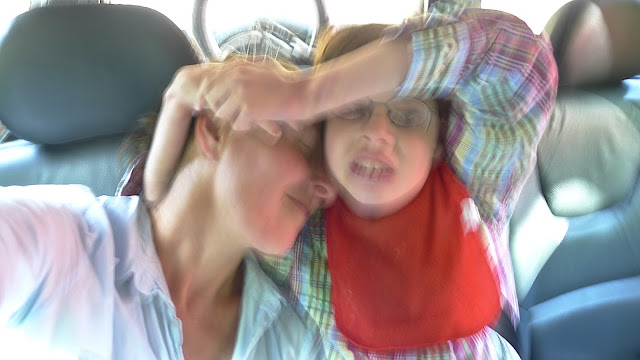