Yesterday, from the front corner of Mr. Dwyer's fourth grade classroom, I began with my usual introduction of Calvin, told them of his premature birth and of the anomaly in his brain. I went on to explain a little bit about epilepsy, and then I answered their questions and listened to their comments.

The children wanted to know what Calvin’s favorite food is, how many pills he takes every day, if he can read and write, if dogs and cats can have seizures, if Calvin has any siblings and what things Calvin likes to do. One girl wondered whether if she said hello to Calvin he’d remember her. Another wanted to know if epilepsy is contagious and still another wondered if he likes sweets. Perhaps my favorite question of the day came from a towheaded boy asking me what would happen if Calvin was in space, which made me wonder again about hyperbaric pressure chambers. One sweet boy, whose brother I know is a lot like Calvin and who also has seizures, raised his hand and said, “Calvin is a good person.”

I told them I think Calvin likes breakfast sausage best, which I cut up into bite-size pieces so he can feed himself. As I counted, out loud, the number of pills Calvin takes—two-and-a-half tablets in the morning plus one liquid, one chewable and two powders, five pills at noon, two-and-a-half pills at night plus one liquid and, in addition, two cannabis oils a few times a day—some of the kids mouths dropped open. I realized later that I had left out two liquid drops. I tried explaining why my husband and I decided not to have more children, that we'd been older than most parents—forty—when Calvin was born and that we had wanted to give one-hundred percent of our attention to Calvin with the hope of being more able to help him meet his potential. I made sure to add that all parents have enough love for more than one child, even if one of them is disabled.

As best I could I tried to describe stigma, tying it to the old myth and fear of epilepsy as contagious and that era's segregation, shunning and institutionalization of those plagued with the disorder. I assured the children that, although Calvin may not visually respond to them, if they say hello, he is aware of their presence and he might remember them—remember their voices—if they were to greet him every day.

One boy raised his hand insisting, “Don’t ever take a drug where the side effect is worse than what you are taking it for,” and so we talked about the side effects of the drugs Calvin is taking, the headaches, the dizziness, the lethargy, the hyperactivity, the insomnia, the withdrawal.

In explaining why Calvin is the best person I know, I said that he would never make fun of someone or say something mean about someone, and that he’d love anyone no matter who they are, what they look like, if they speak with an accent, if they are missing a leg or if they wear old clothes. I explained that if anyone ever tries telling them that someone is bad just because of their religion or their native country or their skin color, that they should stand up and say, “No, that isn’t true,” because we are all the same on the inside.

After forty-five minutes, I stood to leave and the class gave me a giant wave in the fashion of big arena sports fans, then a girl named Jenny handed me a card she’d drawn for Calvin with a flower on the front and, inside, a masked, glassy-eyed cat, or perhaps a racoon. As a decent illustrator myself, I am most impressed with her skill.

I left the class with a smile, my insides warm and squishy, and as I exited the building, I held the door open for a little girl and her mother. As I watched my lonely shadow yawn and stretch across the sidewalk, I listened to their easy conversation wishing that it was one that I could be having with my boy. 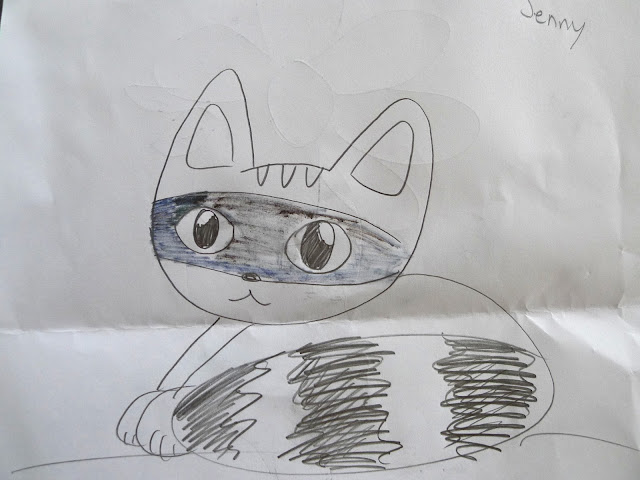 Posted by Christy Shake at 4:18 PM