Today, the first day it has felt like autumn to me, we took a Sunday stroll a mile or so across campus to downtown. Calvin walked much of it on his own as he did yesterday, which is a major feat for him. It seems the further we get away from a benzo decrease the better he does; it has been almost six weeks since the last one, having paused the wean briefly to introduce vitamin D and zinc supplements intended to help his withdrawal and possibly even his seizure control. I'll let you know how it goes.

As for Calvin's behavior during this short respite from the benzo wean, it's pretty damn good. He's sleeping like a champ and not staying up until midnight totally wired. He's walking well and is slightly less stubborn. He's waking a bit happier, playing with his toys longer and drooling and finger-snapping less. I just hope we can expect things to continue getting better after we get him off of the clobazam completely, which at this rate might take another year to eliminate the last six milligrams he takes every day. And when this feels like forever, which is often, I try to remind myself that we are going in the right direction and, with any luck, it will all be downhill from here, and perhaps we'll have a lot more successful Sunday strolls in our future. 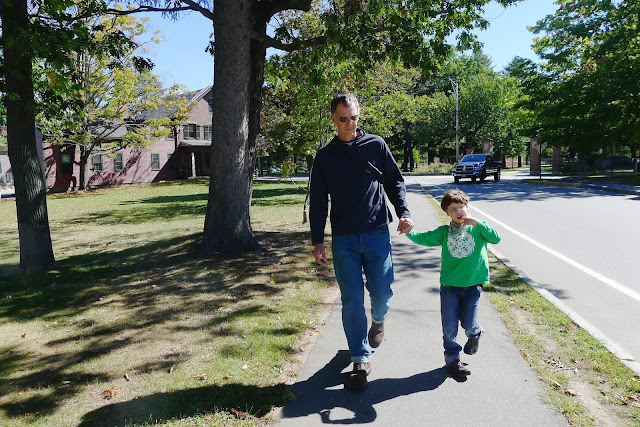 Posted by Christy Shake at 3:31 PM