We've been talking about it for years. This was going to be a first. All this time we've been reluctant—afraid we might disrupt the other diners. Nervous there might be spilled drinks. Doubtful we'd be able to stay seated long enough to finish our meals, and so we've never taken Calvin, who is eleven, out to dinner at a restaurant. Not once. We figured it was about time.

Yesterday, our boy was in relatively good spirits at the cafe and, later, enjoyed a decent stint at the agricultural fair where he walked without balking, sat without shrieking and even pet a few of the beasts. I'd brought enough of his pre-diced food plus his late afternoon cannabis oil dose so we didn't have to go straight home after the fair. In all of those things we saw opportunity, so we nabbed it.

For the most part, Sundays at four o'clock are quiet at our local watering hole. Instead of bellying up to the bar, though, we camped at a four-top near the windows overlooking the river. By all accounts it appeared that Calvin, who is now big and stable enough to sit relatively safely in his own chair, was having a good time. You can see for yourself, here—a little crazy, but not too out of the ordinary considering the antiepileptic drugs he's on, not to mention the active benzodiazepine withdrawal.

After we ordered and were served, then had a chance to put a good dent into a tasty heap of greasy fries, Calvin decided he was finished, so he pushed back his chair almost tipping the table over. I got up and led him around by the hand, carefully guiding him between obstacles. Eventually, he settled into a nice bright spot next to our table where the painted brick was rough and cool on his tongue and fun to pat. I stood with one eyeball on my precarious kid, the other on the disappearing mound of crispy goodness. From there, I simultaneously ate the fries, stole sips from Michael's beer and watched Calvin, and without causing some sort of ruckus—something we've been dreaming about for years. 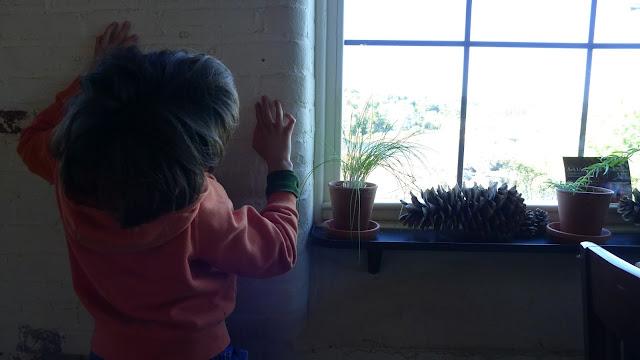 Posted by Christy Shake at 2:56 PM